In the late 70s, it was clear that if a thermonuclear fusion reactor capable of net electricity production was to be built, it would have to be big. The technical obstacles connected the construction of such a large device would be hard to overcome by one single nation. Thus, international cooperation on fusion research seemed necessary. The first attempt to design an international thermonuclear research device began in 1978. The INTOR project (International Tokamak Reactor) has four partners: the Soviet Union, the European Atomic Energy Community, the United States, and Japan. Hundreds of scientists from all involved countries met two to four times a year in Vienna to discuss possible designs of an international reactor. But the project never reached even the design phase, and the progress was only slight. There was no strong political need for a huge, money-consuming fusion device. Things changed in 1985 at the Geneva Superpower Summit, where US President Ronald Reagan and General Secretary Gorbachev of the former Soviet Union met. They agreed that another clean, safe, and sustainable source of energy would be required for their countries’ energy future, and that intensive work on an international thermonuclear research reactor should begin. One year later, at the Reykjavik summit, an agreement was reached between the European Union (Euratom), Japan, the Soviet Union, and the USA. The name of the project, ITER, stands not only for International Thermonuclear Experimental Reactor but also means “way” in Latin, as it has to be a way to a clean fusion power plant. 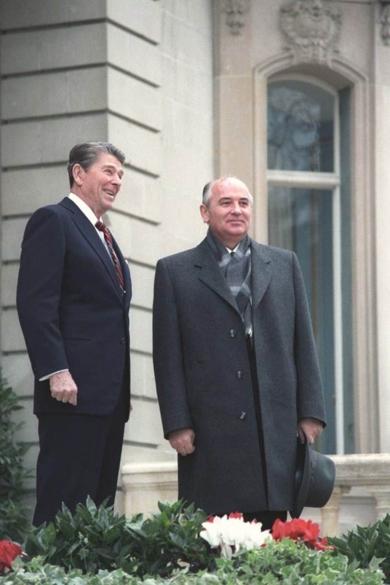 US President Reagan and General Secretary Gorbachev of the Soviet Union during the Geneva Summit, 1985.

The work on the ITER design started in 1988 and was finished in 1998 when the final design of ITER was approved. In the same year, the United States stepped back from the project because of concerns about the projected cost of the program. The negotiation about the project’s location started. As the USA was out of the project, locations in Europe (Garching, Germany) and Japan (Naka) were suggested. A location near Ontario was also suggested by Canada, which was not an ITER member, but withdrew it later. In 2003, the People’s Republic of China and the Republic of Korea joined the project. The USA changed their mind and re-joined. The years-long negotiations narrowed possible ITER locations to two places: Cadarache, France, and Rokkasho-Mura, Japan. Both locations have their advantages and disadvantages. Cadarache was inland, 106 km from the nearest harbor; Rokkasho-Mura could be threatened by earthquakes. But neither Japan nor Europe wanted to give in. Both wanted to have ITER. The Broader Approach was negotiated so that there would be no “winner” or “loser” but a “host country” where the ITER would be built and a “non-host country” that would get many benefits like supplementary research funds. After another exhausting negotiation, Japan agreed to be a “non-host” country and ITER would be built in France. The groundwork started in 2007. The final members of ITER were China, the European Union, India, Japan, Korea, Russia, and the United States. This international collaboration means that various parts for the machine are manufactured in various countries all over the world and transported to Cadarache, where they have to be fitted together with submillimetre accuracy. The ITER reactor is nearly finished, and the first plasma is expected in 2026.

During the ITER negotiations, it was assumed that after ITER, there would be a single common international thermonuclear reactor called DEMO, which would eventually produce electricity. For various reasons, the idea of one reactor was abandoned, and now all interested countries are developing and designing their own demonstration fusion power plant with expected first electricity production around 2050.