The effects of radioactivity and ionizing radiation must be measured and expressed in the appropriate units. The frequency of the radioactive changes is known as “activity”, the “dose” is the amount of radiation energy that is absorbed by the matter and the “equivalent dose” describes how different types of radiation affect humans.

The basic property of radioactive matter is its activity measured in the unit called the “Becquerel”. One becquerel (1 Bq) means that every second there is just a single disintegration occurring in the matter. It is a very small unit. In a human body, thousands of potassium atoms 40K disintegrate every second. The measurements are usually given in kilo and gigabecquerel. One can also encounter the old unit known as the “curie”.

Evaluating the effect of radiation on matter is also important. The amount of energy absorbed by matter is known as the dose and is measured in the unit called the “gray”. One gray (1 Gy) is 1 joule of energy transferred to 1 kg of matter. One can also encounter the old unit known as the “rad”. 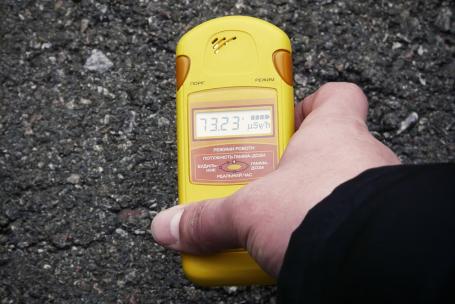 Individual types of radiation have different effects on living tissue, e.g., 1 Gy of alpha radiation has a different effect than 1 Gy of gamma radiation. For this reason, the so-called “equivalent dose” has been introduced. It is a measure of the effect of the radiation on the human body and the unit is the “sievert”.

Just as there is a difference between drinking a bottle of whisky in a minute or over a year, there is a significant difference between exposing an organism to a certain dose of radiation in a minute or over a year. That is why the so-called dose rate has been introduced. It is expressed in Gy/sec. For the radiation dose of a human being, we use the equivalent dose rate expressed in Sv/sec. In reality, the most common unit is μSv/hour or mSv/year.

Various types of detectors are used to detect ionizing radiation. Dosimeters are used to measure the dose of radiation a human being has been exposed to. The basic principal of all detectors is the same: radiation passing through it causes a certain effect on the detector that can be measured.

Schematic diagram of a pocket dosimeter.

Scintillation detectors
incident radiation hitting a scintillating crystal causes a flash that is captured (usually after being multiplied) by a photomultiplier.

Ionization chambers
when radiation passes through an inert gas-filled tube and it ionizes the gas, the produced ions can, for a very short time, conduct a current that can be measured. The Geiger-Mueller detector is based on this principle. It allows the measurement of particles passing through the detector, but not their energy. 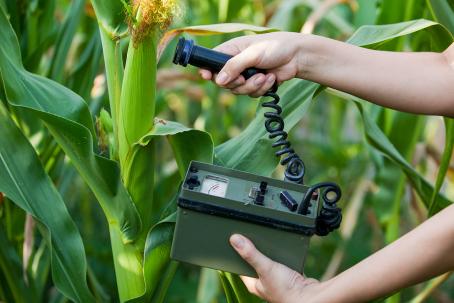 Radiation measurement of corn plants using a device based on the Geiger-Müller detector.

Proportional counters
voltage is applied to the ends of an inert gas-filled tube. Ionization caused by passing radiation leads to the production of electrons that continue to travel (due to the applied voltage), and this causes an avalanche of electrons. The overall charge is proportional to the passing particle’s energy.

Trace detector
used to measure radon. A particle passing through leaves traces in a special material contained in the detector. The detector is placed for a certain period of time in the environment to be measured and then these traces are evaluated.

Schematic diagram of a film dosimeter.

Film dosimeter
particles passing through a detector cause a gradual film blackening the intensity of this blackening is then evaluated.

Calorimeter
the amount of heat released by incident radiation is measured.

Thermoluminescent dosimeter
incident radiation excites electrons in the dosimeter’s material. These electrons, when subsequently heated, drop back to their ground state and emit electromagnetic radiation (light) that is then measured.

Semiconductor detectors
radiation passing through a semi-conductor causes electrons to be transferred to the conduction band, free electrons and holes are created, which results in current passing, for a very short period of time, through the semi-conductor.

Wilson diffusion cloud chamber
it offers the only method to visualize passing ionizing radiation. Particles passing through a vapor of water or alcohol ionize it. The resulting ions act as condensation nuclei, around which a mist will form. Particle tracks can be seen as a cloud trace. The bubble chamber works on a similar principle: a particle passing through pre-heated liquid (water or hydrogen) causes boiling: tiny bubbles are created along its track.

The curie is defined as the activity of a single gram of uranium.