There are many types of radioactive waste and each requires different handling and safety measures. The period for which a radioactive waste must be isolated from the environment also differs. Some waste is not just radioactive but also toxic (e.g. mercury, plutonium) or it may also present a biological danger (e.g. excrement, blood, dead laboratory animals).

Classification According to Activity Level 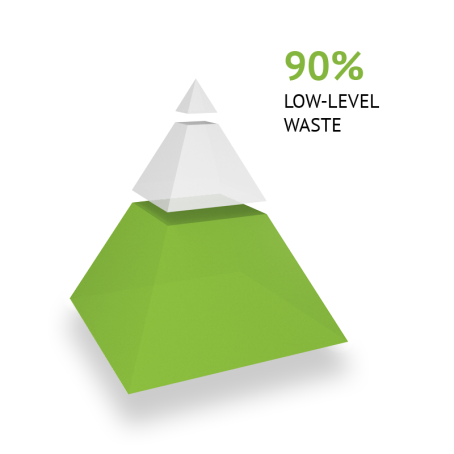 A total of 90% of all radioactive waste is low-level waste. It is produced by many industries and health care plays a major role. Only a small portion of low-level waste comes from the operation of nuclear power plants. These are various contaminated gloves, clothing, paper, used filters, medical syringes, etc. They contain a small amount of short-lived radioisotopes. No special shielding and handling is required and their radioactivity decreases relatively quickly to the natural background level (from a few days to hundreds of years). 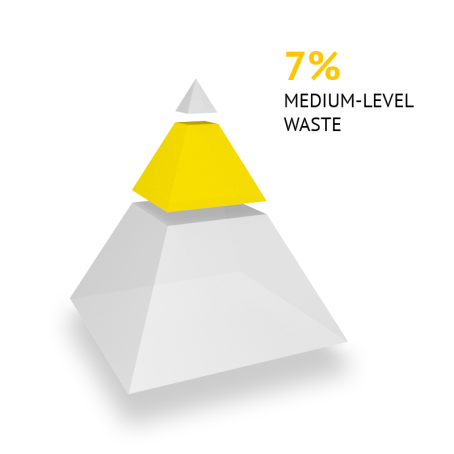 This waste constitutes about 7% of the total radioactive waste. It contains a higher proportion of radioisotopes, both short-lived and long-lived radioisotopes. These are primarily produced in the chemical industry (sludge, resins), heath care (radiation sources used for cancer treatment) or they are irradiated metal elements used in nuclear power plants (e.g. the metal containers of spent nuclear fuel). ILW frequently requires shielding. Its harmful effects may last from hundreds to thousands of years. 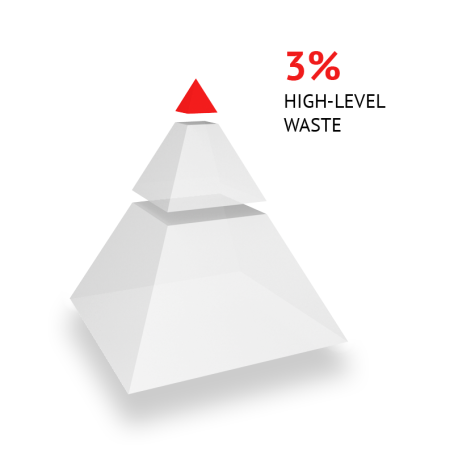 The typical activity of high-level waste is 104—106 TBq/m3. It primarily includes spent nuclear fuel or concentrated waste left over from nuclear fuel reprocessing. If the spent fuel is not reprocessed in a given country, it is considered waste, but if reprocessing takes place, the spent fuel is considered to be a raw material and the reprocessing by-products are considered waste. Since high-level waste is often a mixture of isotopes with short and long half-lives, it is effective to first separate them (if technically and economically feasible) and handle each separately. HLW requires shielding, perfect isolation from the environment, and long-term storage because it can be harmful for tens of thousands to millions of years. High-level waste often generates lots of heat from the decay of radionuclides. Some waste must be artificially cooled. Other waste may be cooled by air circulation around the flask containing the waste. Waste can generate heat for tens of years.

Depending on how it is produced, each waste contains a different ratio of radionuclides. For waste handling, the associated half-life is very important, i.e. radionuclides with a short half-life (up to 30 years) or long half-life radionuclides (up to millions of years). Short half-life isotopes often emit strong gamma radiation, handling is more difficult, and better quality shielding is required. However, the radioactivity decreases quickly. Long-lived isotopes often emit alpha and beta radiation that is easily shielded. On the other hand, they remain radioactive for a very long time.

Classification According to State 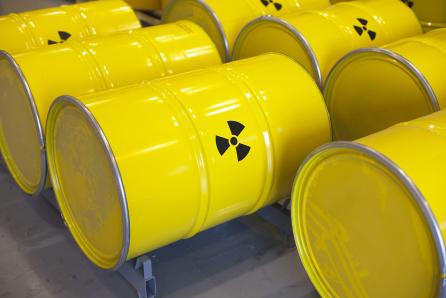 Almost all radioactive waste is solid low-level waste. Its volume may be reduced by incineration or pressing into barrels.

Radioactive waste is most frequently in a solid state. The goal of most processing procedures is to transform the waste into a solid state. Solid-state waste is easier to handle and the radionuclides may be easily isolated from the environment.

These are usually liquid chemicals that are radioactive (e.g. heavy water) or liquids containing dissolved radioactive particles (e.g. sludge). In a nuclear power plant, this type of waste is produced during the cleaning of the primary coolant from the pools used to store spent fuel and from the solutions used for decontamination and maintenance, etc.

Radioactive waste may be solid, liquid or gaseous. Solid waste is the easiest to handle and process. All processing technologies are thus trying to transform waste into solid-state waste. 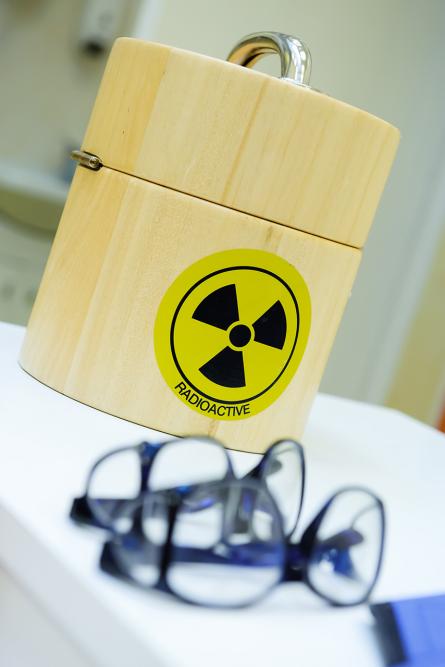 Institutional radioactive emitters are transported in shielded containers and after they expire, they are mostly medium-level waste. They are harmful for hundreds of years.

Some nuclear power plants have such strict limits that if Brazilian coffee were roasted inside, it would be handled as a low-activity waste.