The nucleus of an atom is composed of neutrons and protons. The neutrons are elementary particles with no charge, but the protons are positively charged and mutually repel each other. If there were only the electrostatic repulsive force, no atomic nucleus would be able to remain in one piece: it would fly into many separate pieces. Gravity cannot bind the protons together since it is 1036 times weaker than the electrostatic repulsive force. The nucleus is bound together by the nuclear force. This force is strong but has a short range. In principle it starts to act when nucleons almost touch each other. It acts the same between a couple of neutrons or protons as it does between a neutron and a proton.

Video: Fission of uranium. The principal reaction in the nuclear energy industry is the interaction between a neutron and an atomic nucleus and its subsequent fission.

1 eV is the energy absorbed by an electron while moving across an electric potential difference of one volt.

Schematic depiction of the fission energy balance of a uranium ²³⁵U nucleus; approximately 200 MeV can be gained.

It is obvious that if two light nuclei are bound together, a certain amount of energy could be gained. For example, if we bind two deuterium nuclei (heavy hydrogen, its nucleus contains a single proton and a neutron), we gain 6 MeV per nucleon and a helium nucleus is produced.

Mass deficiency of a nucleus. The difference between the mass of a nucleus and the sum of the masses of the nucleons of which it is composed.

Similarly, if we could split a heavy nucleus, part of its binding energy could be released. For example, if we could split a uranium nucleus, we could harness 0.9 MeV per nucleon and in total about 200 MeV per nucleus. Controlled fusion is a nuclear reaction that combines atomic nuclei and releases up to 1% of the atomic rest energy. It is still under development. In the nuclear power industry, the fission of uranium, plutonium or thorium nuclei is utilized. During this reaction, about 0.1% of the atomic rest energy is released.

Energy released by the fission of a single nucleus of uranium is 3.2 × 10−11 Joule. That is five orders of magnitude smaller than the energy of a single flying mosquito. 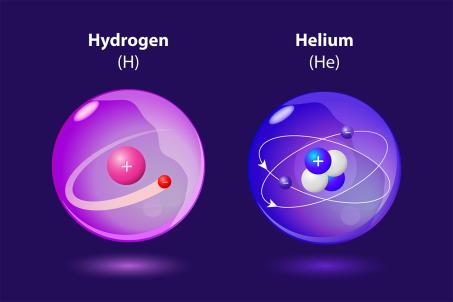 Depiction of the structures of hydrogen and helium atoms.

Model of the phases of the fission of an individual heavy uranium nucleus releasing approximately 0.1% of its rest energy.