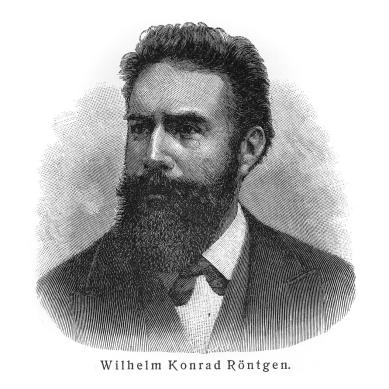 Wilhelm Conrad Roentgen — German physicist, laureate of the first Nobel prize for physics, discoverer of the Roentgen rays, also referred to as X-rays, which have become very important in medical diagnostics.

Radioactivity is a natural part of our living environment. Since it can not be perceived by our senses, it took half a century to record and study its effects. At the same time, the discovery of radioactivity opened the doors to an understanding of the makeup of the atom and subsequently to the release of nuclear energy.

The Ancient Greeks already searched for answers to the question: what is the essence of our world? Based on conceptual investigations, Leucippus (approximately 500—440 BC) came to the conclusion that matter cannot be divided indefinitely. His successor, Democritus (approximately 460—370 BC), developed this idea and postulated the existence of atoms; small, indivisible, and indestructible particles that make up the entire universe.

Not much was known about the composition of an atom until Wilhelm Conrad Roentgen (1845—1923) discovered in 1895, while experimenting with a gas discharge lamp, a strange radiation that could penetrate solid matter. He named it the “X-ray”, and an astonishing (for the time) X-ray image of his wife’s hand circled the world. A year later, Henri Becquerel (1852—1908) experimented with phosphorescence. 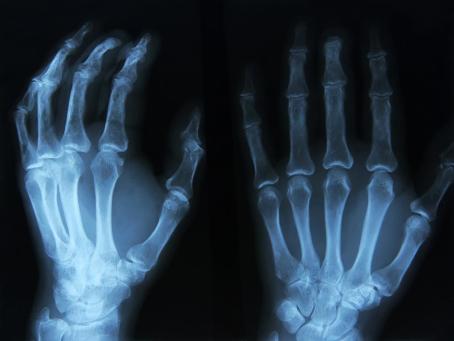 X-ray image of a patient’s left hand. The oldest image in the history of medical diagnostics is the 2D image of a hand’s interior structure.

He exposed various minerals to sunlight and placed them on a photographic plate. By chance, he once put a piece of unexposed uranium salt on the plate and then discovered that this mineral caused the plate to be exposed at the location where the mineral was placed. Becquerel reasoned that this was an as yet undiscovered capability of matter to emit radiation without any outside energy source. Marie Curie Skłodowska (1867—1934) named this property “radioactivity”. 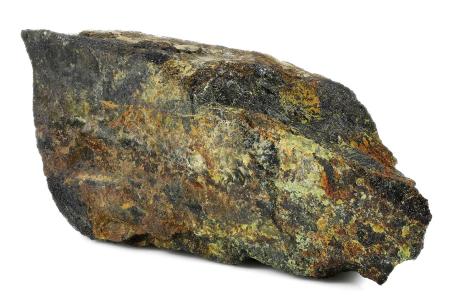 Another piece in the atom puzzle was found by J. J. Thomson (1856—1940) who experimented with cathode radiation and identified the negatively charged particles that are now called electrons. He assumed that these were particles of an atom and in order to explain the overall neutral charge of an atom, he formulated the hypothesis in 1898 that electrons reside within the atom inside some positively charged matter like raisins inside a pudding.

Thomson intended to name the electron a “corpuscle”. However, other scientists preferred the name “electron” originally suggested by George Johnstone Stoney.

Roentgen vacuum tube. Depiction of a historic Roentgen tube from the beginning of the 20th century. When a high DC voltage was applied to its negative electrons, this tube emitted new penetrating electromagnetic radiation.

This strange radiation was then subjected to close scrutiny by Ernest Rutherford (1871—1937). First, he divided the radiation into two groups. He called them alpha and beta based on their penetration depth. Then, he was able to prove that alpha radiation is actually a stream of helium atom nuclei while beta radiation was composed of electrons. In 1903, he also postulated the existence of a third class; “gamma radiation” even though he still did not know anything about its composition. In 1909, he made an important discovery explaining the nature of the makeup of the atom when his students exposed a thin gold foil to alpha-particle bombardment and realized that some alpha particles were deflected through surprisingly sharp angles. A year later, he had an explanation: nearly all the atom’s mass is lumped into a very small volume, the nucleus, and the electrons spin around it. When an alpha particle directly encounters the nucleus, it is scattered backwards. Otherwise, it passes through the atom. 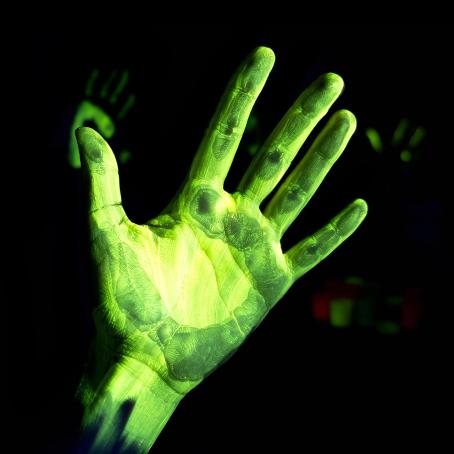 Fluorescent image of a right hand illuminated by UV radiation. Henri Becquerel also experimented with a similar type of luminescence when he placed illuminated minerals on a photographic plate.

However, Rutherford’s planetary model of the atom did not explain how the electrons remain in their orbits. According to classical physics, they should have emitted their energy and collapsed into the nucleus. In 1913, Niels Bohr (1885—1962) was able to offer an explanation by means of quantum physics. According to his theory, electrons spin around the nucleus in certain orbits without losing their energy. Only a transfer to a higher or a lower orbit would require the absorption or emission of a certain quantum of energy. Bohr’s model was subsequently refined but it is quite sufficient for a basic description of the atom. Other sub-atomic particles are the proton, discovered in 1917 by Rutherford, and the neutron, discovered by James Chadwick in 1932.

95 percent of all known atom nuclei are unstable and therefore radioactive.

Bombardment of an atom by alpha particles.

Some combinations of protons and neutrons are unstable and thus the nucleus releases particles so that the ratio of protons and neutrons shifts into a more stable state. This process is known as radioactive decay or transmutation. When alpha or beta radiation is emitted, the atomic number changes and thus the element is transmuted into another element. During gamma transmutation, only a photon is emitted and the nucleus releases excess energy.