If a slow neutron collides with a nucleus of uranium 235U, the nucleus may disintegrate into two fission products and release 2 (sometimes 3) fast neutrons. These neutrons then may in turn collide with other nuclei and disintegrate them as well, releasing 2 more neutrons per decay. There are 4 neutrons in total released in the second generation which may then go on to disintegrate other 235U nuclei. In each subsequent generation, the number of neutrons increases. If each reaction releases just two neutrons, 1010 atoms would disintegrate in the 30th generation. This process is known as a chain reaction.

Such a chain reaction could propagate only if the neutrons almost always collide with a 235U nucleus and split it. However, such conditions are uncommon. 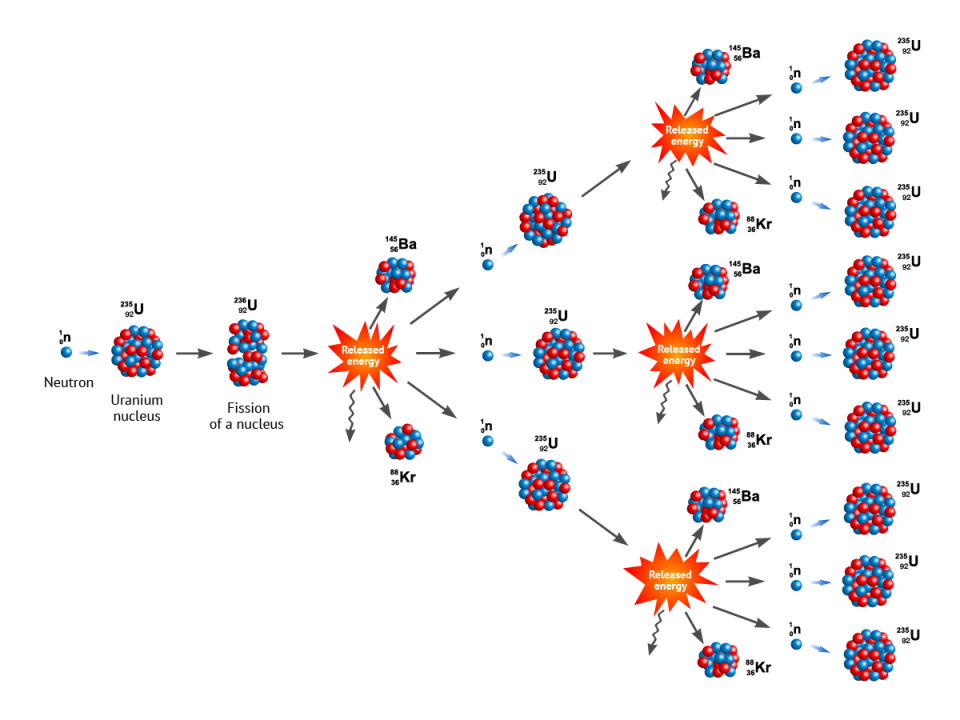 Moderator
fast neutrons have a low probability of splitting a uranium 235U atom, more frequently they undergo scattering. In order to increase the probability of fission and initiation of a chain reaction, the neutrons must be slowed down. A moderator is used to slow the neutrons down.

The Ciscovery of Chain Reactions

In 1935, Enrico Fermi (1901—1954) succeeded in splitting an atom. He tried to bombard various elements with neutrons in order to cause their radiation. The use of uranium ore was very successful. However, it took four long years to learn what kind of a process took place in the ore. Based on calculations, Meitner, Hahn, and Strassman proved that Fermi did in fact split an atomic nucleus. Since neutrons are released during fission, Fermi speculated that a chain reaction would be possible. Lisa Meitner’s calculation suggested that energy is released during fission and the idea of how to use this nuclear energy was born.

The discovery of the fission principle was very important for the power industry. The names of the discoverers are commemorated on German, Italian and American postage stamps.

Fermi experimented with the irradiation of uranium even in a garden reservoir. He realized that water might effectively slow the neutrons down and thus increase their likelihood to split a uranium nucleus.