The world around us is full of radiation. For example, we are able to see thanks to the visible radiation from the sun and mobile communication is possible due to microwave radiation. The term “radiation” refers not only to such electromagnetic waves (which are photons), but also can refer to a stream of particles (such as alpha particles). Ionizing radiation has the ability to liberate an electron from an atom which ionizes the atom.

A moving particle loses its energy by gradual ionization; it slows down and finally stops. A moving photon cannot stop but it can also gradually lose its energy until it is absorbed by an atom. The distance traveled by radiation before it is stopped or absorbed is called its “range”. Ionizing radiation is a part of our environment and its sources are primarily the radioactive elements naturally occurring in the soil, as well as in living organisms. Ionizing radiation can be classified into alpha, beta, gamma, X-rays, and neutrons while cosmic radiation is composed primarily of high-energy protons.

Penetration of various types of radiation.

Alpha radiation is actually a stream of helium nuclei, i.e., two protons and two neutrons bound together. The nucleus is positively charged (it bends in a magnetic field) and has a short penetration depth due to its large mass. It is absorbed by a sheet of paper or by the top layer of human skin. During alpha decay, the element’s atomic mass goes down by four. Typical alpha radiation sources are uranium, thorium, and radium.

Beta radiation is actually a stream of electrons or positrons, i.e., positively charged electrons (anti-electrons). This radiation is thus positively or negatively charged and bends in a magnetic field. Since it is much lighter than alpha radiation particles, its penetration depth is much bigger. It can be shielded by a few centimeters of water or a few millimeters of aluminum sheet. Electrons are created in the atom nucleus when a neutron decays into a proton, neutrino, and electron. During beta decay, the atomic number increases by 1. A typical beta radiation source is cesium or the potassium isotope 40K. 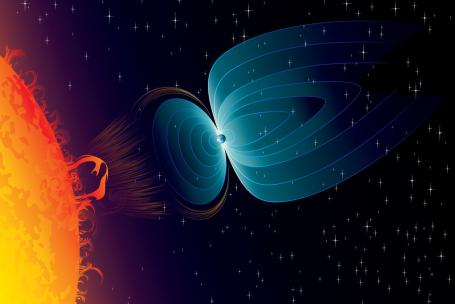 Cosmic radiation contains high-energy protons. Most of these particles are captured by the Earth’s magnetic field.

An X-ray is a shortwave radiation at a wavelength between 10 nm and 100 pm. A magnetic field does not affect X-rays. X-rays have a large penetration depth. They can be shielded by a thick layer of concrete or lead. They are a type of indirect ionizing radiation by means of the particles produced after the X-rays interact with matter. X-rays are not created by the decay of an atom’s nucleus, but rather when some electrons from higher energy levels fill up a vacancy in a lower orbit, or when charged particles slow down by scattering in an electromagnetic field (“deceleration radiation”).

Video: Types of radiation and their bending in magnetic field

Neutrons are elementary subatomic particles with no net electric charge. They are part of the atom nucleus and their mass is roughly the same as a proton’s. Neutrons are not affected by an electric field. A neutron ray is a type of indirect ionizing radiation by means of particles produced after the neutrons interact with matter. Neutrons travel great distances but they can be shielded by a few meters of water or other substances rich in hydrogen (such as paraffin or concrete). Neutrons are produced under terrestrial conditions primarily during fission in nuclear reactors or by a mixture of alpha radiation sources and light elements. A typical neutron source is Ra-Be (radium-beryllium) or Po-Be (polonium-beryllium).

Protons are part of the cosmic radiation coming to the Earth from the Sun, as well as from space. These are primarily high-energy protons. They are produced during fusion reactions inside stars. They have energies up to 1020 eV. Protons usually do not reach the Earth’s surface. They are captured by the Earth’s magnetic field. Following a collision with the top layer of the atmosphere, protons initiate a shower of secondary radiation.

A proton with energy of 1020 eV has the same amount of energy as a baseball going 60 km/hour.