The inertial confinement fusion takes place in the centre of a large sphere about 10 metres in diameter. The chamber walls are made from aluminium panels several centimetres thick, covered with concrete. To serve as biological shielding, the concrete is injected with boron to absorb neutrons. The chamber is filled with holes that permit the laser beams to enter the chamber and provide ports for all necessary diagnostics and target handling systems. The windows for laser beams have to be kept perfectly clean so as not to disturb beam focusation. The various diagnostics watching target implosion and ongoing fusion reaction can peer through ports or be extended toward the target to observe the processes more closely. Inside the chamber, the vacuum is maintained. After every shot, the fusion products and debris arising from shattered pellets, hohlraum, and unfused material have to be evacuated. 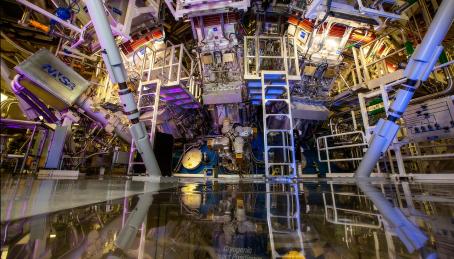 Outside view of NIF chamber.

The huge size of the chamber, in comparison to the millimetre-sized fuel pellet, has several reasons. The energy released from a successfully compressed pellet could be substantial. If 1 mg of D-T fuel completely undergoes fusion, the released energy will be 340 MJ, which corresponds to the explosion of 75 kg of TNT. The average energy released during the present experiments is about 50 kJ. The remains of the pellet are scattered around at velocities many times exceeding the speed of sound. A smaller chamber could thus be damaged by a fusion explosion. The second reason is the number of laser beams entering the chamber together with diagnostics-there wouldn’t be space in the smaller chamber for so many ports. 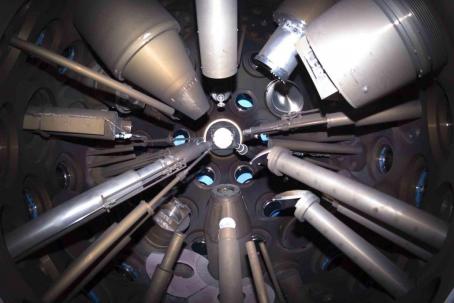 In the design of an inertial fusion power plant, the chamber has to be equipped with a cooling system that will lead the heat from the fusion reaction toward the steam generator and tritium breeder. Some designs came with the idea of liquid lithium running down the chamber walls. Lithium will absorb heat and neutrons, which will produce tritium, and also the constant flow will wash the walls of target remnants.