Parabolic trough collectors fall in the category of so-called concentrators. They concentrate sunlight from a large area into as small a focus as possible through which runs the absorber. This way they reach temperatures around 400 °C and are suitable for the generation of electricity in large, farm-type plants. An alternative use may be heat supply to industrial-scale technologic processes.

In terms of design, the parabolic trough collector is basically a long parabolic mirror with a dark tube absorber running along the focus line. Sunbeams are reflected from the large surface area of the mirror, concentrating at the focus where they heat up the heat transfer medium in the absorber. The absorber tube with the heat transfer fluid, which is oil in most cases, is often designed as a Dewar (a vacuum flask or thermos — vacuum insulated) tube to minimize heat loss. The thermal efficiency of parabolic trough collectors can be as high as 90% if the mirror surface is good.

The trough collector mirrors are interconnected to form rows which are the basic units of a solar farm. The orientation of the collectors and rows are most often along a north-south axis and the collectors turn around their longitudinal axis to track the Sun. Systems oriented along the east-west axis are less efficient but on the other hand, they do not require the rotation of the mirrors every day. Only small adjustments are made to compensate for seasonal changes in the Sun’s track. 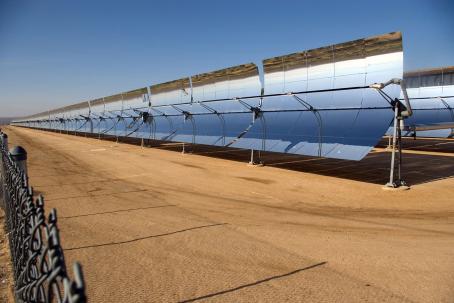 Trough collectors of solar farms are usually north-south oriented and follow the movement of the sun.

The largest parabolic trough solar thermal power plant is the SEGS (Solar Energy Generating Systems), a cluster of nine facilities in the Mohave Desert, California. These can be found in three areas: Daggett (map), Kramer Junction (map) and Harper Lake (map). Construction started in 1985 and today the installed capacity is 354 MW. Approximately 90% of the energy from the power plant is generated from solar energy. At times when there is not enough sunlight the plant can burn natural gas.

Aside from the USA, parabolic trough solar thermal power plants have been built by Spain and Italy. Further plants of this kind are under construction in Egypt, Algeria, Morocco and the United Arab Emirates. The first commercial parabolic trough collector solar power plant in Europe is Andasol 1 (Andalusia, Spain / map) with its 50 MW of installed capacity.

The overall efficiency of the transformation of solar energy into electricity supplied to the grid of parabolic trough solar thermal power plants is approximately 15 to 20%. 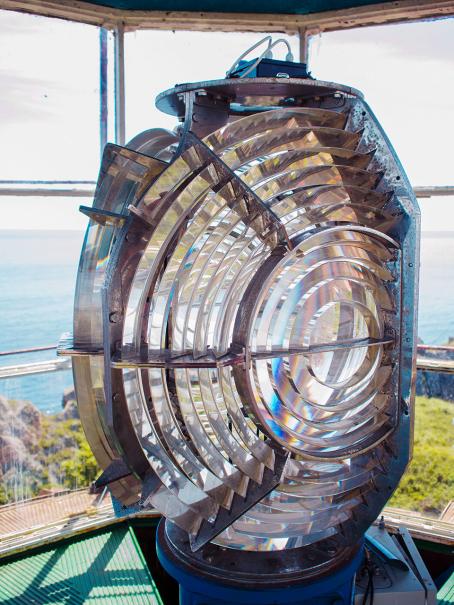 The Fresnel lens at the Point Arena Lighthouse in California, USA.

A parabolic reflector can be replaced by several rows of linear reflectors that exploit the Fresnel lens principle. Each row of mirrors has a slightly different inclination so that all of them cast the reflected sunlight on the bottom part of the absorber. The irradiation of the absorber is about 30 times higher than natural. The heat transfer medium is usually water which is heated to 300 °C. The resulting steam directly powers a turbine.

The manufacturing costs of flat mirrors are significantly lower than the cost of parabolic mirrors. Since they are close to the ground, there is little risk of wind damage and the output is about the same as with parabolic mirrors. A Fresnel solar power plant requires lower investment than a comparable parabolic trough thermal solar power plant. Reflector rows follow a north-south axis and track the Sun. Compact linear Fresnel reflectors use two absorbers for one batch of mirrors. Each absorber runs along one side of a reflector row. Thus, sunlight is used more effectively and the plant requires less space than a single, central absorber line Fresnel solar power plant. 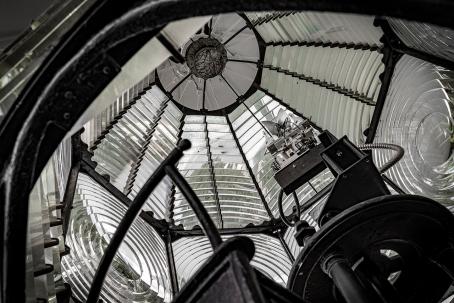 The interior of the Pensacola Lighthouse with the light source at the focus of the Fresnel lenses. 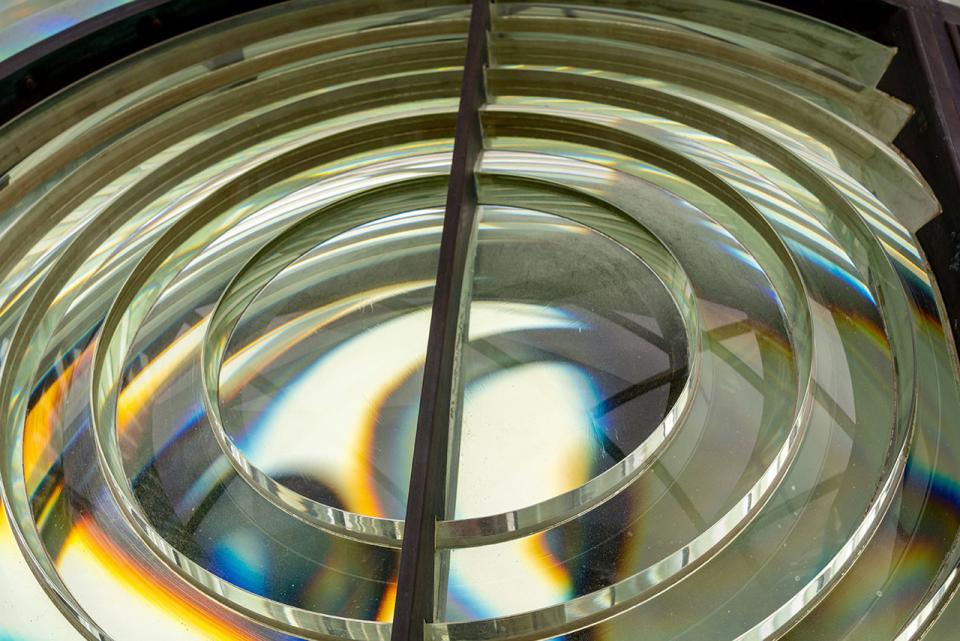 The rows of linear mirrors, concentrating solar radiation into the absorber employ the principle of the Fresnel lens.

Fresnel lenses will probably be used in the field of concentrated photovoltaics where they will concentrate sunlight onto a new generation of powerful solar cells.