The Largest Hydroelectric Power Plants in the World 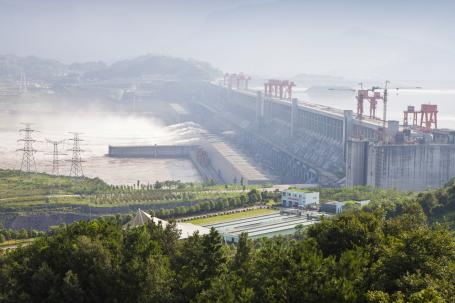 The construction of the largest hydroelectric power plant in the world, the Three Gorges Dam on the Yangtze River in China, started in 1993. Thanks to its size, it is considered a modern equivalent to the Great Wall of China. The dam is 181 meters high and 2,335 meters long. In addition to its energetic use (its installed capacity of 22,500 MW should cover 10% of the demand of China), this dam protects adjacent regions from floods while improving conditions for shipping. But aside from its indisputable benefits, this structure also has a negative impact on its environment. 1.24 million People (150 cities and 1,350 villages) had to be relocated during the filling of the reservoir and some archaeological sites were lost to the water too. The huge water mass has a considerable impact on its environment. The valley slopes suffer from frequent large scale landslides while mud and waste builds up on the bottom of the lake.

The Three Gorges Dam reservoir consists of three flooded canyons. It is 650 km long and its surface is over 1,000 km2.

Before the “Three Gorges Dam”, the Itaipú hydroelectric power plant on the Paraná River was the largest in the world (now second). It lies on the border between Paraguay and Brazil and has supranational company status so it is not owned by any of the two countries. It was completed in the eighties of the last century. The construction took nearly 14 years. The dam is 196 meters high and 7,919 meters long. The installed capacity of all 20 turbines is 14,000 MW total. When full, the water level of the reservoir is 100 meters above the level of the original river. The power plant covers approximately 20% of the yearly demand of Brazil and practically all the demand of Paraguay.

The expression “Itaipú” in translation means “The Singing boulder”.

The highest situated hydroelectric power plant was built in Tibet at the Yamzho Yumco lake, over 4,400 meters above sea level.

The third biggest hydroelectric power plant in the world is the Guri in Venezuela. The construction of this plant started in 1963, the first phase was completed in 1978 and the second in 1986. The dam is 7,426 meters long and 162 meters high. 20 turbo-generators with a total installed capacity of 10,200 MW yearly produce 47,000 GWh of electricity.

Note: 47,000 GWh is the actual value of electric energy produced, 87,000 GWh could be theoretically produced if there was enough water.

The highest hydraulic head in the world is used by the Bieudron hydroelectric power plant in the canton of Valais in Switzerland. The Power plant is fed by water from the Grande Dixence reservoir (2,364 m AMSL) by a penstock with a maximum hydraulic head of 1,883 meters.