Theta-pinch device Scylla (white tube on the right side).

In 1905, lightning struck the hollow copper lightning rod and squeezed it like a paper tube. Scientists Pollock and Barraclough investigated this phenomenon and discovered that the large currents flowing through the tube’s walls generate their own magnetic field, which causes compression. This is due to the Lorentz force. If two parallel wires are carrying current in the same direction, the wires will be pulled toward each other. The effect was humorously called “pinch” and was used at the beginning of fusion research. The plasma could be considered as made up of many parallel wires, and when the current is run through the plasma, it is contracted, “pinched”, by Lorentz forces into a thin filament. If the pinching is successful, the temperatures in the filament could reach the values necessary for fusion. Two major principles could be used: the Z-pinch and the theta-pinch. In the Z-pinch, the current runs down the axis of the device (e.g., a cylinder filled with gas) while the magnetic field is azimuthal. In theta-pinch, the magnetic field runs down the device axis while the electric field is in the azimuthal direction. Toroidal pinches with a chamber in the shape of donut were used as well as linear ones that had to cope with particle losses at loose ends.

The lightning rod crushed by pinch effect of lightning. 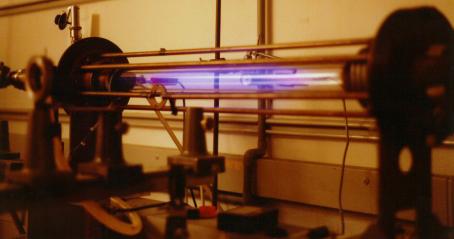 The experimental and theoretical progress on pinches was driven by fusion power research. The boom followed after 1951, when Argentina announced the achievement of controlled thermonuclear fusion, which later turned out to be a fraud. Britain, America, and Russia started to fund fusion research more intensively and the pinch method seemed promising. At Los Alamos National Laboratory, James Tuck built Perhapsatron. As the name suggests, he was not quite sure that fusion would be achieved. It started operation in 1953 and was built from whatever was at hand-for example, the toroidal glass tube of the central chamber came from a local glass shop. In the middle of the chamber was a large iron transformer core, which was used to induce current in the plasma. The machine has a Z-pinch configuration and exhibits a series of plasma instabilities that plague all pinch machines shortly after being commissioned. Tuck asked the U.S. Atomic Energy Commission in 1951 to fund his design, together with Lyman Spitzer, who asked for money for his stellarator concept. Tuck thought that Spitzer’s project was too ambitious and that his humble Z-pinch would receive money easily, but the opposite was true-Lyman Spitzer got USD 50,000 for stellarator and James Tuck left empty-handed. He was funded then with the same amount from LANL. 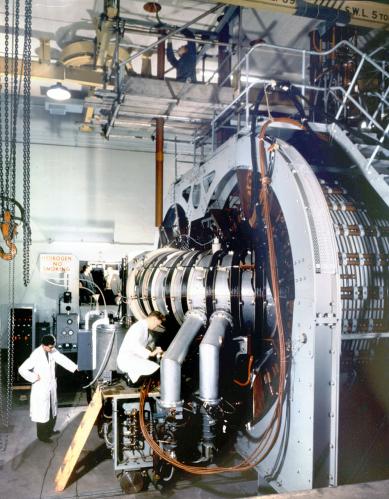 Another big machine on the Z-pinch principle was built in the United Kingdom. The ZETA (Zero Energy Thermonuclear Assembly) started operation in 1957. Its aluminium torus has a major radius of 1.6 metres and its 150-ton pulse transformer was the largest one built in Britain up to that point. Soon after the start of operation, the ZETA was able to produce bursts of about a million neutrons per pulse. With the temperature estimated at up to 5 million kelvin, it was supposed that the neutrons were of fusion origin. In the press, the success was celebrated as more important than the Soviet Sputnik launch. Unfortunately, it turned out that the temperature was too low for fusion and the neutrons arose from plasma instabilities. Yet the ZETA was not at all a disappointment. It probes typical pinch plasma instabilities like kink and sausage instability. It discovered the reversed field pinch concept that has led to better plasma stabilisation in pinches, and tested the Thomson scattering laser for direct temperature measurement.

True thermonuclear fusion reaction was reached in 1958 on Scylla-I, the theta-pinch machine of Los Alamos National Laboratory. This device was of the linear type — a one-meter-long cylinder full of deuterium compressed to 15 million kelvin. Scylla and its successors showed poor confinement time, probably because of the particle losses on the loose ends. The toroidal Scylla named Skyllac was designed to reach burning deuterium-tritium plasma, but failed to do so and was shut down in 1977.

In the 60s and 70s, research on pinches was gradually abandoned in favour of more successful concepts of tokamaks and stellarators.