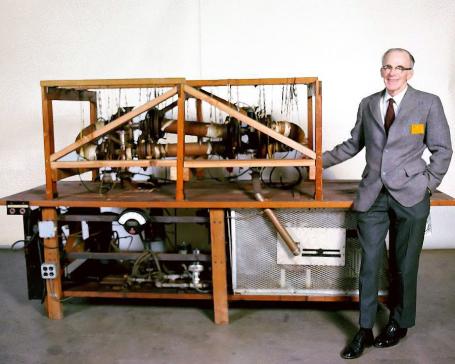 In 1951, Lyman Spitzer was preparing for a ski trip in Aspen when the world was struck with the news that Argentina had reached controlled fusion in the Huemul project led by Ronald Richter. Spitzer carefully read the article and calculated that such a project could not be operational, that is, capable of reaching the temperatures required for fusion. He was thinking about the problem while skiing and invented the stellarator. This device would hold plasma only by a combination of magnetic fields, so it could work continuously.

The work on the first stellarator started at Princeton Laboratory. Spitzer received USD 50,000 from the United States Atomic Energy Commission and suggested the project be named “Project Matterhorn”. As an avid mountain climber, he felt “the work at hand seemed difficult, like the ascent of a mountain”. The stellarator Model A was a “table-top” device consisting of a tube of borosilacate glass bended into the figure 8 shape and copper coils wound around the tube. The device clearly demonstrates that plasma can be created and confined in this way. Another stellarator followed. On B-1, ohmic heating was used to reach temperatures of about 100,000 Kelvin. The stellarator B-64 was the first one equipped with a divertor. To understand its strange designation, it is important to note that a Cold War between the USA and the USSR was at the time underway, and a lot of effort was made to hide on-going experiments and progress from the enemy. So it was not possible to say that this stellarator had a figure-8 shape with squared corners, but the information was hidden in its name: 8 squared is 82, which equals 64. On the large machine Model C, neutral beam injection for heating was used for the first time. This device reached 5 million kelvin in 1969. But the confinement time was bad for all stellarators. The particles were escaping at an even higher rate than predicted by the Bohm formula. It seemed that if the problem could not be overcome, the stellarator would be of no use as a power plant. In these troubled times, the great success of the T-3 tokamak came from the Soviet Union. After it was confirmed that it really reached 10 million kelvin and maintained it for several milliseconds, it was decided in the USA to quit with stellarator research and rebuild the Model C stellarator as an ST (Symmetrical Tokamak) in 1969. 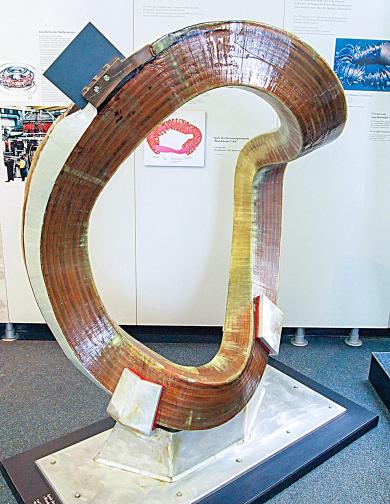 The Wendelstein 7-AS stellarator coil in the museum.

Stellarator research has continued in other countries where scientists believe the diffusion issues can be overcome. In Ukraine, a simpler design of torsatron was invented with helical winding around a toroidal chamber completed by poloidal coils. The first torsatron, Saturn-1, started its operation in 1970 at the Kharkov Institute of Physics and Technology. A very similar design, called the heliotron, was explored at Kyoto University, Japan. In Culham, the PROTO-CLEO device showed that stellarator confinement could be better than that given by the Bohm formula, and ohmically heated plasmas on CLEO showed that parameters similar to those of tokamaks could be obtained. But the problems with diffusion and stellarator sensitivity for magnetic field configuration were still a big issue. The tokamaks outrun them in terms of temperature reached and confinement time. In projects for future power plants, only tokamaks were considered, and the biggest international fusion research reactor, ITER, is also a tokamak.

The time worked for stellarators. The progress in plasma theory and computational power give them the possibility to have a perfect magnetic configuration calculated, and the first stellarator with odd-shaped modular coils was built in Garching, Germany in 1988. Wendelstein 7-AS demonstrated that the novel modular coils can generate the precise magnetic field required. It broke all stellarator records with plasma temperatures of 70 million degrees, energy confinement times of up to 40 milliseconds, and reactor-like plasma densities. This sparked a new stellarator boom. In the USA, the Helically Symmetric eXperiment (HSX) was built and started operation in 1999. In Japan, a Large Helical Device (LHD) with a heliotron configuration and superconducting coils produced the first plasma in 1998, and several smaller stellarators were built all over the world. In 2015, the largest stellarator in the world, Wendelstein 7-X, started operation. Despite the fact that none of them is equipped to work with deuterium-tritium mixtures and achieve fusion, they set several temperature, pulse duration, and fusion product records. As an inherently steady-state device, they are concepts to be reckoned with when designing fusion power plants.