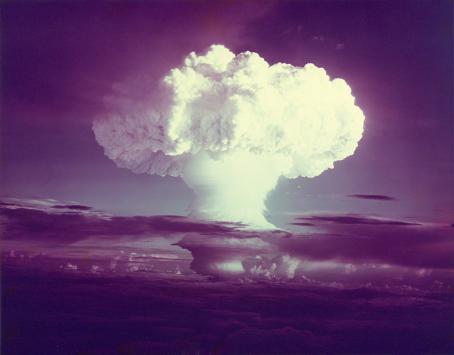 Experiments with particle accelerators proved the possibility of fusion reactions, but the first large fusion energy release was realised in a thermonuclear bomb. The hydrogen bomb can be considered the first successful demonstration of inertial confinement.

Work on the hydrogen bomb was carried out together with the fission bomb development. The huge energy released by fission was used for compression and ignition of fusion fuel. Simply put, the fission explosion created a shock wave that compressed fusion fuel inside the fission envelope.

The first device used to demonstrate the hydrogen bomb principle was the Greenhouse Item, detonated in 1951 on the island of the Pacific atoll Enewetak. It was not a true fission bomb and was never intended to be a weapon, but it demonstrated that the direction of thermonuclear bomb research was correct. The deuterium-tritium gas was inserted into the enriched-uranium core of the fission bomb. The neutrons generated from fusion helped to burn fissile fuel and nearly double the yield of a fission bomb.

The first true fusion weapon was Ivy Mike, which was detonated in 1952. It was not transportable and resembled more a building than a bomb. The heavy and large equipment was needed because liquid deuterium was used. The entire Mike, with its cryogenic systems, weighed about 74 metric tons. The bomb was the first full-scale test of the Teller-Ulam design, and its explosion completely destroyed the test island Elugelab, leaving a nearly 2 km wide crater where the island had once been.

The Teller-Ulam design is an arrangement of thermonuclear bombs that was proven successful and is supposed to be used today in virtually all thermonuclear weapons. In this design, the bomb consists of two parts: the primary, where the fission fuel is, and the secondary, containing fusion fuel. The X-rays from the explosion of the primary are reflected by the surrounding uranium container (called a tamper) to the secondary and compress it to thermonuclear temperatures. Neutrons produced by fusion help to split fission fuel. The yield of the bomb is thus dramatically enhanced as most of the fusion and fission fuel is consumed during the blast.

The first transportable US bomb was Castle Bravo, which used lithium deuteride, which is solid at room temperature. Its yield was 2.5 times greater than predicted because of unforeseen additional reactions involving lithium 7. This led to a large radioactive contamination of the east part of the Bikini atoll.

The largest thermonuclear bomb ever created and detonated was the Russian Tsar Bomba (bomb-emperor in Russian), tested in 1961 in remote areas of Novaya Zemlya. It detonated 4 km above ground and achieved a yield of 50 Mt. The shock wave from the blast travelled three times around the Earth. No more bombs like this were ever created.

Although there were attempts to use the great energy of thermonuclear explosions for peaceful uses like heating water in underground caverns, mining or hydraulic fracking for gas mining, it was never achieved. The main reason was radioactive pollution from the fissile part of the bomb.