There are three plasma parameters describing whether it could reach thermonuclear fusion: temperature, density, and confinement time. From the Lawson criterion, which combines them together, two major approaches to achieving fusion come out. The first is to keep plasma at a relatively low density (n ≈ 1020 m−3) and long confinement time (τ ≈ few seconds). This is done by magnetic confinement. The second method tries to keep plasma at a high density (n ≈ 1030 m−3) and very short confinement time (τ ≈ 10−10s). This is called inertial confinement. The term “inertial” means that during fusion, nothing is holding particles in place. No magnetic cage, no holders. The fusion occurs so quickly that the particles will stay together only thanks to their inertia. 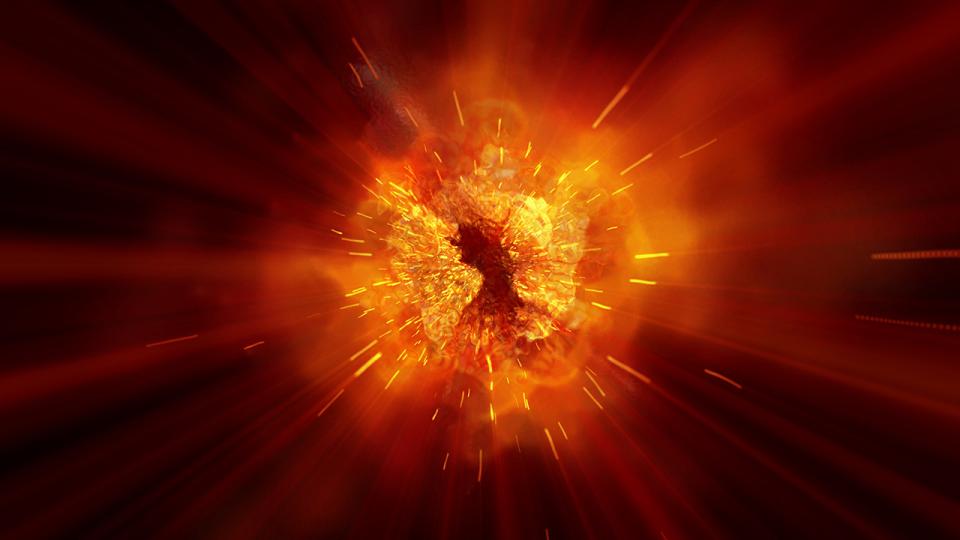 The fusion reactions occur in the middle of compressed pellet before it is blown apart by the released energy.

The idea of inertial fusion is very simple. If you compress a small amount of deuterium-tritium fuel into a very dense sphere, the compression process will heat the sphere interior to temperatures high enough for fusion to occur. The alpha particles arising from fusion will pass their energy to their neighbors, heating them up and enabling even more fusion reactions to take place. Plasma will begin to burn. In a very short time, the fuel is consumed and the rest of it is blown into space. The energy released by fusion in this brief moment could be tremendous.

The first version of successful inertial fusion was the hydrogen bomb, where fusion fuel was compressed by a shock wave from surrounding fissile material. Although there were ideas on how to exploit its destructive potential for peaceful use, the hydrogen bomb was never found to be a good way to generate energy. Aside from military use, the amount of energy released from a hydrogen bomb is too large to be handled by any reasonable means.

Another way to compress D-T fuel is the use of particle beams or powerful lasers. The vast majority of current research facilities use lasers with petawatt power. The laser beam is split into many beams focused on the target in the form of a pellet filled with deuterium and tritium. The lasers ablate the surface of the pellet, which causes a shock wave to travel inwards to compress the pellet interior. When the shock wave reaches the core of the pellet, the temperature and density are high enough to start the fusion. To improve the process, the energy delivery during the laser pulse is “shaped”. It starts with relatively mild energy that starts the compression, then the sharp, powerful pulse induces a shock wave in the compressed material. The density in the core is around one-thousand times the density of water, or around 1,000 g/cm3.

The method of simply firing lasers on the pellet surface is called direct drive. As the number of beams focused on the pellet surface is limited, there will inevitably be places where the pressure will be higher than elsewhere. Uneven compression will lead to Rayleigh-Taylor instabilities that will mix the pellet content. The core will not be compressed perfectly, and the fusion will not be ignited. Such a concept is very sensitive to laser focusation and pulse timing as well as the perfectly smooth shape of the fuel pellet, which is hard to achieve in practice.

Indirect drive partially solves the problem with symmetrical compression. In this approach, the pellet is suspended in the centre of a gold or lead cylinder called “hohlraum”. The laser beams are not focused on the pellet but on the inner walls of the hohlraum instead. The walls irradiated by concentrated laser energy will start to produce intense X-ray radiation. X-rays fill the hohlraum and evaporate the peel of the pellet, which starts to move outward while the rest of it starts to move, thanks to the law of conservation of momentum, inwards, compressing the fuel. The compression is smoother in this concept, and the requirements for precision beam targeting and pellet manufacturing are less stringent, but the hohlraum heating consumes a significant amount of inserted energy.

The energy released in one “shot” could exceed one megajoule.

The repetition rate of inertial fusion confinement devices is very low. Before the new “shot”, the reaction chamber has to be free from debris from the previous pellet, the laser entrance windows have to be perfectly clean and the new fuel pellet has to be positioned in the centre of the reaction chamber with nanometer precision. Most of the devices are able to do only one experiment per day.