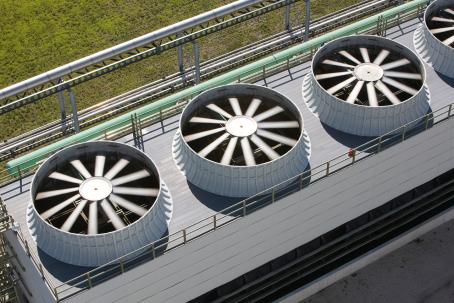 Tokamak ITER operation would not be possible without several types of cooling methods, because heat generated by fusion must be discarded. The ITER Tokamak and its auxiliary systems will produce an average of 500 MW of heat during a typical plasma pulse, with a peak of more than 1,100 MW during the plasma burn phase. This is comparable to the thermal output of an average power plant. All of this heat needs to be dissipated to the environment. On the other hand, there are a lot of devices that need to stay very cold. Magnetic coils must be cooled to 4 K to maintain superconductivity. Cryogenic vacuum pumps catch particles on its frozen cryoabsorption panels cooled to 4 K. Some diagnostics also needs to be cooled for best performance. For cooling purposes the large water cooling system and also the huge cryogenic system is built on ITER tokamak. 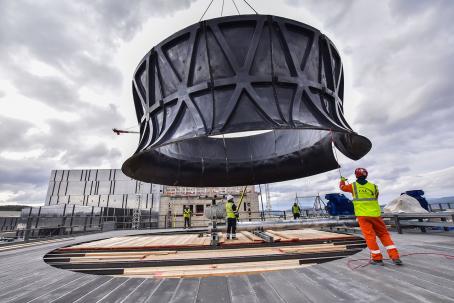 Fan cylinder for one of the heat rejection towers.

The cooling water system provides cooling for the blanket and divertor as well as for auxiliary systems such as radio frequency heating and for other systems like current drive systems, the chilled water system, the cryogenic system, and the coil power supply and distribution system. It consist of about 36 kilometres of piping arranged into loops and heat exchangers of the tokamak cooling water system (TCWS), the component cooling water system (CCWS), the chilled water system (CHWS) and the heat rejection system (HRS). TCWS components will be “nuclear-grade” as they must comply with French nuclear pressure equipment directives. As an experimental device, the ITER is not equipped for electricity generation so all produced heat needs to be dissipated via a heat rejection system consisting of induced-draft cooling towers. To prevent a rise of mineral concentration in the cooling water, part of it will be continuously discharged from the system and replaced by water from the Canal de Provence. Discharged water’s temperature will be measured, as well as its pH level, and presence of pollutants and, if it meets the strict environmental criteria, released into the Durance River. The amount of circulating cooling water is about 25,000 m³. Through the pipes of tokamak cooling water system (TCWS) it will surge at a flow rate of 5 m³/second, a velocity of 10 metres/second, and a pressure of 14 bars (up to 50 bars at the pump outlet). In contrast, in your household the water is delivered to the tap at a flow rate of 0.1 m³/ second, a velocity of 1 metre/ second, and at a pressure of around 3.5 bars. 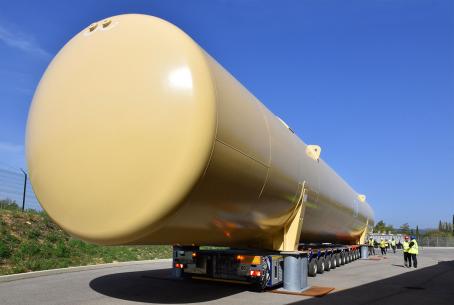 Cryogenic system will be used at the ITER to create and maintain low-temperature conditions for the magnet, vacuum pumping and some diagnostics systems. The magnets keep their superconductivity at a temperature as low as 4 K (−269 °C) which cannot be achieved by water cooling therefore supercritical helium is used. As “pre-coolant” will serve 80 K cold liquid nitrogen, so the cryogenic system will be capable of providing cooling at three different temperatures — 80 K, 50 K and 4 K. Both cryocoolants will be prepared in the cryoplant, a large soccer-field-size facility on the ITER site. It will house three helium refrigerators that will provide 4 K helium for superconducting magnets and cryopumps with a maximum cumulated liquefaction rate of 12,300 litres per hour. Nitrogen will be extracted directly from the atmosphere in a gaseous nitrogen generator and then processed in the two liquid nitrogen refrigerators. 80 K cold nitrogen will be used as “pre-coolant” in helium refrigerators and for cooling the thermal shield of vacuum vessel. Cooling fluids generated in the cryoplant will run to the Tokamak Building; from there, approximately five kilometres of cryolines will distribute them to the different sites. Most of the cryogenic power will be consumed by magnets (45 percent) followed by the thermal shield (40 percent) and the cryopumps (15 percent). A total amount of 25 tonnes of 4 K cold liquid helium is estimated to circulate through the ITER installation during operation.