The main goal of the ITER is not to just create fusion plasma but to get as much information about such plasma as possible. In order to know what the plasma temperature is, density, shape or position, what the plasma is doing right now and what it will probably be doing in the next seconds, whether the fusion reaction occurs and how much energy was gained from it, and many other details, the ITER is equipped with more than 50 diagnostics systems. Their data will be the only source of information about the vacuum vessel interior — after completion it will be inaccessible for humans and it has no windows to look inside. One set of diagnostics will give information about the vessel and its integrity. So called “in-vessel lighting system” and more complicated “in-vessel viewing system” will visually check blanked modules after each discharge to be sure that they are intact and experiments can continue safely. Temperature measurements of the blanket and divertor parts will ensure that any part does not dangerously overheat and leak-tightness will be watched by pressure measurement systems. 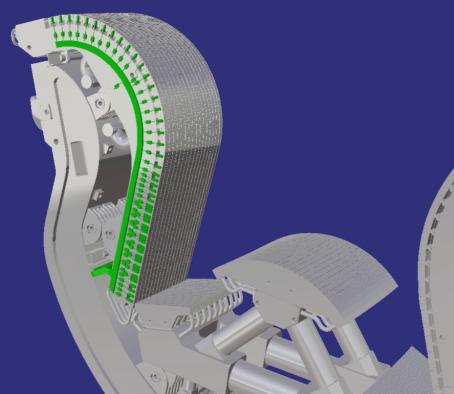 Another piece of data is crucial for plasma control. It is very important to know the plasma’s shape and position and because the shape of the plasma is determined by magnetic fields, this will be measured mostly by various sets of magnetic diagnostics. For example, flux loops made from a total of 2,4 km of slim coaxial cable arranged into vessel walls will measure the plasma boundary shape, its energy and position and its evolution in time. Also microwave diagnostics probe the main plasma and the plasma in the divertor region in order to measure plasma position. According to these data, plasma could be pushed into the desired place by the magnetic stabilization system using poloidal field coils or in-vessel coils. What could also be controlled is the amount of radiation loss, that is, how much heat is coming out from the plasma in the form of electromagnetic radiation. This dissipates over a wide area in the tokamak and does not concentrate mostly on the divertor as conduction and convection heat. But it has to be maintained at an ideal level, desired is that 90 percent of the power loss (not counting the neutrons) is electromagnetic radiation. This could be controlled by bolometers. A basic bolometer consists of a thin strip of metal that absorbs radiation and heats up. The resistance of the metal strip is then measured to determine how much radiation has been absorbed. Arrays of thin film metal absorbers will be used to capture integrally the light emitted by the plasma over most of the relevant spectral range (from the near infrared to the soft x-ray range) with lines of sight optimized for tomographic reconstruction of a plasma radiation profile. If they report that radiation loss is much below the optimal 90 percent, the control system may pump more impurities into the plasma to increase radiation. If it is above 90 percent, it may either reduce the impurities or increase the heat input through external heating. The characteristics of impurities along with a wide range of plasma parameters like density, input particle flux, ion temperature, helium density, fuelling ratio, plasma rotation, and current density will be studied by spectroscopic instruments covering visible to X-ray wavelength range. The plasma temperature and density will be measured by Thomson scattering and interferometry. A Langmuir probes for electron density measurements will also be used though the ITER plasma will be so hot that no probe could survive immersion even on the edge. But surprisingly a “safe” place was found for the probes in the gaps between adjacent targets of the divertor where balmy temperatures of only about 2,500 °C exists thanks to the puffing neutral gas. About 400 probes will be installed there. When fusion reaction starts, lots of neutrons will be produced and various systems of neutron diagnostics is waiting to count them. Neutron flux enables the calculation of the total fusion power. There are neutron cameras, neutron spectrometers, neutron flux monitors or micro fission chambers available for neutron monitoring. The pencil-sized micro fission chamber is an argon-gas-filled container, whose walls are coated with a thin layer of fissile material such as uranium. When a neutron hits a uranium atom, the latter splits and a large amount of energy is released. As the energetic debris travels through the gas-filled volume of the chamber, the gas is ionized, and high voltage applied to the electrodes inside the fission chamber results in a current that can be measured and recalculated into neutron flux. Besides the above mentioned diagnostics, there are number of other ways to measure and control plasma parameters in ITER tokamak. What they all have in common is that they need to be precisely manufactured and installed before tokamak completion because after it neither mounting nor, in most cases, repair will be possible. All diagnostic components facing plasma or situated close to it have to be able to survive harsh conditions never experienced by any diagnostic in any of today’s machines. The temperature, neutral particle flux or neutron flux will more resemble stellar conditions rather than those found on earth. Quick data readings, high accuracy and precision will be required and instruments will have to maintain best performance during unprecedentedly long pulse duration of 400 to 600 seconds.