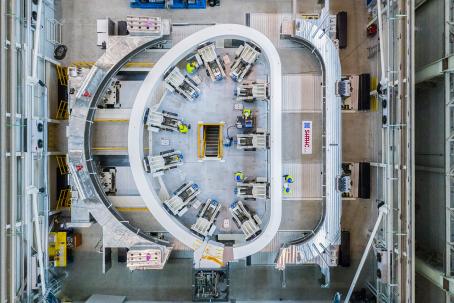 A toroidal coil is inserted into a structural steel case.

The ITER magnet system will be the largest and most integrated superconducting magnet system ever built. It will produce magnetic fields that will initiate, confine, shape and control the ITER plasma. Combined stored magnetic energy reaches 51 gigajoules, so conventional electromagnets were not an option. Coils are made from superconductors, which use quantum effects of superconductivity where electrical resistance vanishes and magnetic flux fields are expelled from the material when cooled bellow a critical temperature, around 4 Kelvin (−269 °C). Superconductive magnets carry a higher current and produce stronger magnetic fields, consume less power and therefore are cheaper to operate than conventional counterparts. Poloidal field coils are made from niobium-titanium (NbTi). This type II superconductor was discovered in 1962 at Atomics International by T. G. Berlincourt and R. R. Hake and is capable of operating in magnetic fields up to 10 Tesla; in the presence of higher magnetic fields it loses its superconductivity. For higher magnetic fields niobium-tin (Nb3Sn), which keeps its superconductivity up to 30 Tesla, is suitable. This compound was actually discovered in 1954, eight years before NbTi, but its manufacturing is very technically challenging. Nb3Sn alloy is brittle as glass and cannot be easily wound into magnetic coils. The manufacturers are forced to work with niobium and tin separately and only when the coil winding from non-superconducting tin and niobium wires is finished, heat is applied to cause tin diffuse into niobium and create a brittle superconductor. The superconducting cable is made up of both Nb3Sn strands (900 for the toroidal field coils and 576 for the central solenoid coils) and pure copper strands. The copper strands are included in the mix to provide protection in the case of a quench — a situation where superconductivity is lost due to a local temperature rise in the magnets, and the electric current needs supplementary pathways to travel along. The ITER needs 500 metric tons of Nb3Sn strand (more than 100,000 km), produced by nine suppliers. This large-scale industrial effort demanded a ramp-up of global production capacity from 15 metric tons of Nb3Sn per year to 100 metric tons per year. 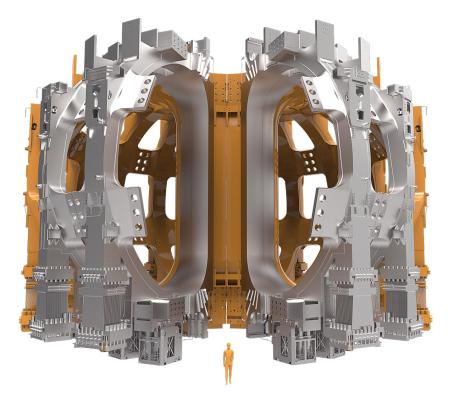 Toroidal field coils consist of eighteen D-shaped magnets placed around a vacuum vessel. Their purpose is to create a toroidal (donut like) magnetic field and confine plasma particles. They are designed to produce a total magnetic energy of 41 gigajoules and a maximum magnetic field of 11.8 Tesla. Weighing 360 tonnes each and measuring 9 × 17 m they are among the largest components of the ITER machine. Toroidal coils are made from Nb3Sn superconductor combined with copper wires and are wound in “double pancakes” — layers of spiralled conductor embedded in radial plates and encased in large stainless steel structures. The whole “superstructure” of toroidal field coils weight 3,400 tonnes. 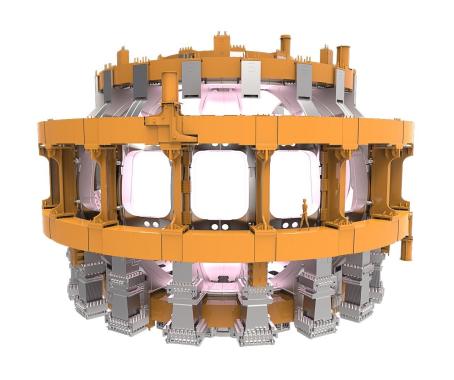 Poloidal field coils look like six giant hoops strung on the vacuum vessel. They are situated outside of the toroidal field magnet structure and are made from niobium-titanium (Nb-Ti) superconductor. The poloidal field coils are designed to produce a total magnetic energy of 4 gigajoules and a maximum magnetic field of 6 Tesla. Their purpose is mainly to shape plasma and contribute to its stability by “pinching” it away from the walls. The largest coil has a diameter of 24 metres; the heaviest is 400 tonnes. The four largest coils are so big that they cannot be transported so an on-site winding facility was built where these poloidal coils are manufactured. 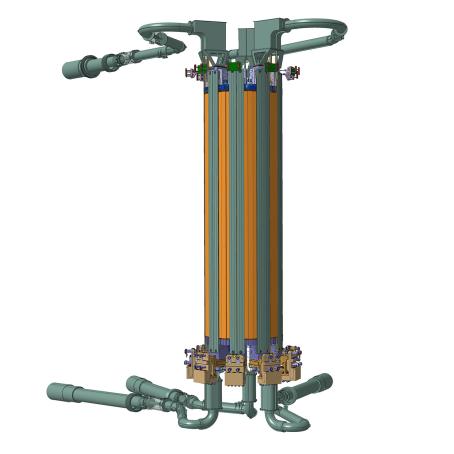 Central solenoid will induce a strong current in the ITER plasma and maintain it during long pulses. Magnetic field, created by this current, will combine with toroidal magnetic field and create helical field with better confinement. In the first phases of plasma creation it will heat it by joule heat. Solenoid is 13 metres (or 18 metres with a support structure) tall, 4 metres wide and weighs one thousand tonnes. It consists of six independently operating coil packs wound from niobium-tin (Nb3Sn) superconducting cable. In the centre of the stacked modules a maximum field of 13 Tesla will be reached and resulting strong electromagnetic forces will try to tear the central solenoid apart. In order to maintain the structural integrity the solenoid is packed within a strong pre-compression support structure made from superaustenitic stainless steel — tie plates running the full height of the central solenoid assembly (both externally and internally) holding its six coils together. The support structure will have to withstand forces in the range of 60 meganewtons (in comparison, the force behind the thrust of a Space Shuttle lift off is about 30 meganewtons).

Correction coils are designed to compensate magnetic field errors. Eighteen coils are arranged in groups of six around the toroidal circumference above, at and below the mid-plane of the vacuum vessel. They are about 8 metres wide and conduct current of about 10 kA.

The so called in-vessel coils are two non-superconducting coil systems inside of the ITER vacuum vessel that provide additional plasma control capabilities. Two vertical stability poloidal coils are installed above and below the machine’s mid-plane and allow fast vertical stabilization of the plasma. Set of 27 ELM coils are fixed to the wall of the vessel and create resonant magnetic perturbations in the plasma so that certain types of plasma instabilities, called Edge-Localized Modes (ELMs), are avoided.