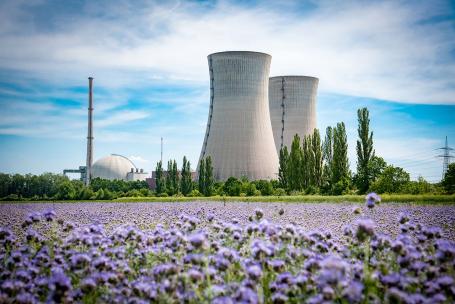 The energy from a fusion power plant will be clean and sustainable. As no fossil fuel has to be burned, no CO2 and no emissions will come out of the chimney. The fusion power plant will have no chimney at all. Fusion fuel is made from “water and rocks”. From water, deuterium is extracted. The rocks are sources of lithium, which will be turned into tritium. The tritium breeders are inside the fusion reactor. The “waste” resulting from the deuterium-tritium reaction is helium, a useful technical gas. During the whole power plant operation, the resulting waste will be minimal. Replaced parts of the reactor, like first wall panels, divertor segments, or tritium breeders, will be radioactive because of neutron bombardment and will be stored on-site in water-cooled storage tanks. A great effort is being made to invent such materials for reactor components that will be neutron-activated as low as possible.

The construction of a fusion power plant will be nearly similar to that of a conventional fission power plant. The reactor will be different, and a lot of superconducting material will be needed for coils, but in general, the concrete for walls and steel for piping will be the same. Most designs of the first demonstration fusion power plant want to adopt the technology of the fission pressurized water reactor (PWR). The pressurized water will serve as a heat transfer medium. With this proven and well-tried technology, the non-reactor part of the power plant will look mostly like the one in a fission power plant. There will be a steam generator, a lot of piping, a multistage steam turbine, and a generator and cooling towers, to name the most important parts.

The essential part of a fusion power plant will be the steam turbine. After harnessing the energy of stars, reaching temperatures higher than in the core of the Sun, and after beating so many technical challenges; there will be a steam turbine at the power plant output, which converts heat to electricity with no more than 40 percent efficiency. No better way to get electricity from heat has been invented yet.

It is difficult to say now how costly the electricity from fusion power plants will be. The experimental reactor ITER is a very expensive and probably so will be the first demonstration fusion power plant. Acquisition costs are high, but this could be balanced by relatively low operation costs. The fuel — deuterium and lithium — is cheap. In today’s experimental reactors, heating is a very expensive item. But when the ignition is reached, the whole energy needed to keep plasma burning will be obtained from fusion products (alpha particles), so no external heating will be needed at all. If the conditions for bootstrap current (self-generated and self-sustained current in plasma) are reached and maintained, no energy for current generation will be needed. The coils generating the magnetic cage will need energy during the whole operation, but as they are superconducting, the energy consumption could not be so high. The power plant will also require fuel handling systems and tritium separation, as well as a cryoplant to produce cooling nitrogen and helium and other auxiliary systems. Hopefully, all of this will not require tremendous costs, so the fusion power plant could be economically competitive with other types of plants.

The great advantage of a fusion power plant is steady electricity production. It does not depend on the weather, season, or part of the day; the fusion reaction is taking place 24/7. The fusion plant could generate electricity throughout the year, with the exception of some necessary shutdowns for maintenance.