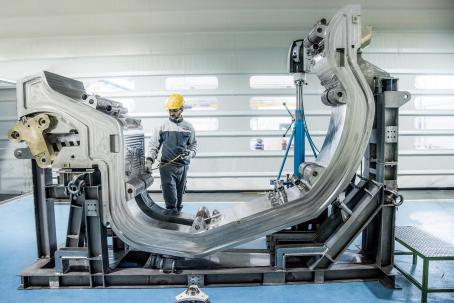 For a successful fusion reaction only the presence of fuel (deuterium and tritium in the case of ITER) in the plasma core is needed; all other particles, whether impurities or helium ash, are unwanted and need to be diverted away from the plasma, because they could cause energy losses due to radiation. Inevitably also some charged particles could escape from magnetic confinement with the result of a high thermal load for the first wall. Therefore, it would be better to divert them to one place designed to sustain a great thermal load, from where they could be pumped out of the chamber and discarded, or, if they are tritium, send back to the plasma as valuable fuel. In order to collect, cool and pump out such particles, a divertor is placed on the bottom of the tokamak vessel. Particles are led toward it by a magnetic field which is elongated and before the divertor crossed. Magnetic “legs” coming from such X-point end right on the divertor plates. Beneath the divertor mighty pumps are located to evacuate the divertor space. 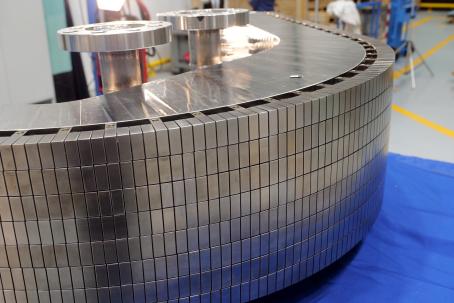 Surface of the inner vertical target.

The ITER divertor is composed of 54 cassette assemblies arranged in a circle on the vessel bottom. Each cassette consists of a structural backbone from austenitic steel and copper alloy on which plasma facing components from tungsten are mounted. These components are called dome, inner vertical target and outer vertical target. From them, the dome will be experiencing lower heat flux, about up to 10 MW/m², the inner targets will have to withstand heat fluxes as high as 20 MW/m². The radiation there will be almost as intense as in the vicinity of a neutron star and heat experienced by plasma facing components will be ten times higher than heat experienced by spacecraft re-entering the Earth’s atmosphere. Plasma facing component armour is made from 300,000 individual tungsten tiles which are actively cooled by water flowing in pipes beneath them at 4 MPa and temperature between 70 °C (on inlet) and 120 °C (on outlet). Whether the water is boiling or not (which would leads to a loss of heat exhaust capacity and damage of component) will be monitored by a special system listening for micro bubbles arising and collapsing in pipes, trying to identify frequencies signalizing trouble. It is expected that the temperature on the tungsten surface of the inner vertical target will be about 1,000 °C in normal operating conditions and 2,000 °C in non-normal conditions, which should not overcome the tungsten melting point at 3,400 °C which is the highest melting point of all the metals. Each cassette weighs about 8 tonnes; only the dome itself weighs about one tonne. All divertor cassettes will be placed after vacuum vessel completion. They will be inserted remotely through lower port windows of the machine and placed in their position with sub millimetre accuracy. During cassette inserting, free space between port and cassette will be at the narrowest point only 12 mm. The accurate position of the whole divertor ring is crucial for right tokamak performance — the magnetic field has to hit plasma facing targets at the right place at the right angle otherwise the divertor would be at risk of damage. But even though manufacturers strive for best accuracy, some sub millimetre deviations are inevitable, especially when components as large as a six-story house are involved. So the exact shape of the magnetic field will only be known after the tokamak is completed. Divertor double concentric toroidal rails along which cassettes are moving into their final position are prepared for this and can be precisely adjusted after the magnetic field geometry is known. Not all divertor cassettes are the same. They differ slightly because they are also occupied by diagnostics watching plasma and divertor performance. Three of the cassette assemblies, for example, will house highly sensitive fibre optic sensors capable of measuring temperature, strain, displacement, and vibrations inside the chamber. These sensors must be resistant to extreme amounts of radiation from both gamma rays and free neutrons. It is supposed that all divertor cassettes have to be replaced at least once during ITER operation.