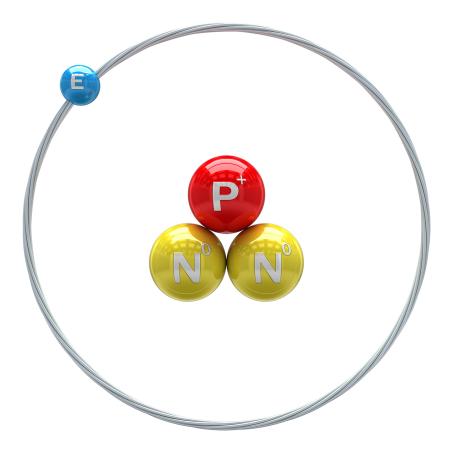 The ITER machine will be the first thermonuclear reactor fully designed to operate with deuterium-tritium fusion reaction. While the first part of the necessary fuel — deuterium — could be extracted from seawater in almost unlimited amounts, the second one — tritium — is very scarce on Earth. It is produced in the upper parts of the atmosphere by cosmic rays. Some small amounts are diluted in water as remnants of atmospheric nuclear tests carried out between 1945 and 1980 and also a few kilograms are produced in CANDU-type nuclear reactors all over the world. The annual production of tritium is estimated to about 20 kilograms and because of its short half-life (12,3 years) it cannot be stored for a long time. This production will be sufficient for ITER’s 15 years long D-T campaign, but future fusion power plants will need significantly larger amounts of fuel, around 100—200 kg of tritium per year. Fortunately, the tritium could be “transmuted” from lithium which is abundant in the earth’s mantle, and seawater. When D-T fusion reaction occurs, helium nuclei and neutrons are produced. The neutron, as a particle without charge, is not confined by a magnetic field, escapes and hits the vacuum vessel wall with high energy. This energy will be used for electricity production in the power plant. But if instead of striking the wall, the neutron strikes an atom of lithium6, it is absorbed and a resulting 3 protons and 4 neutrons are rearranged into one atom of helium (2 protons, 2 neutrons) and one atom of tritium (1 proton, 2 neutrons) while at the same time energy is released. So this tritium “breeding” enhances thermal yield and could be used as way of in-situ fuel production for a thermonuclear power plant. The only fuel needed to be transported into a fusion power plant than will be deuterium and lithium, both abundant elements, so the electricity will be, figuratively speaking, produced from water and rocks. Such a concept needs to be proved and details to be fine-tuned, so ITER will serve as the testing site. In later phases of experiments, two blanket modules will be replaced by four Test Blanket Modules, each of them will test different approaches to tritium breeding and collecting. Two of them will test liquid lithium, while the other two solid breeders. Also, two types of cooling, by water and by helium, will be explored. All approaches have their advantages and disadvantages. In liquid lithium breeder, the mixture of lithium and lead is flowing through module. The lead serves as a neutron multiplier allowing the production of more tritium atoms from one neutron impact as lead releases two neutrons after being hit by one. A liquid mixture allows the collection of produced tritium continuously in huge adjacent facility behind tokamak, but as lithium and lead are metals, their movement could interact with magnetic fields. To overcome this problem, the lithium-lead has to either flow at a low velocity or be electrically isolated from the metallic walls. In contrast, the solid breeder does not interfere with magnetic fields, but to collect the produced tritium the machine has to be stopped and the breeder module removed and replaced with a fresh one. The tritium will then be extracted from the breeder in a facility. Excess heat has to be removed from the breeder by a coolant. As a lithium-lead mixture becomes a liquid at 235 °C, the cooling water needs to be pressurized to avoid boiling, while helium could be easily heated up to 500 to 600 °C, but it has the disadvantage of a much lower heat capacity. It is estimated that each of the test modules (measuring approximately 1.7 × 0.5 × 0.6 metres each) will produce a maximum of 20 milligrams of tritium per day. The commercial thermonuclear power plant will have plenty of such modules which will supply it with all the tritium necessary for its power output. During fusion less than 1 gram of fuel is present in the vacuum vessel at any one moment.

After separating the tritium from the breeder and mixing it with deuterium in desired 1 : 1 ratio, the fuel needs to be inserted into the core of the burning plasma. This is not an easy task because plasma is so hot that the neutral particles of fuel will be ionized on the very edge of the plasma column and then they will be prevented from entering the core by the magnetic field. The goal is to give fuel particles enough velocity that they could reach the plasma core before ionization. Two systems of fuel injection are implemented in the ITER machine. The first one is powerful pumps that inject gaseous fuel into the chamber with throughput of 200 Pa m³/sec on average and 400 Pa m³/sec at peak. The second system is a gas gun that propels a millimetre-sized frozen deuterium-tritium pellets into the plasma with a velocity of up to 3,600 km/h, so the pellets are so fast and cold enough to penetrate deep into the plasma core. The frozen pellet injections are also very useful in ELMs mitigation. ELMs are Edge Localised Modes, bursts of plasma that escape magnetic fields, and which hurtle towards vessel walls. Frozen fuel pellet fired in the right place of the plasma is an effective way of ELMs management.