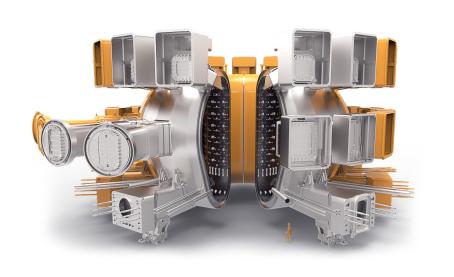 Plasma will be held inside a steel torus called a vacuum vessel. It was proven that the bigger the plasma volume, the better the confinement, so the ITER vacuum vessel will be really big. This donut-shape container will measure 19.4 metres across (outer diameter), 11.4 metres high, and will weigh approximately 5,200 tonnes. The vertical axis of the chamber will be slightly elongated to create the desired D-shape cross-section. The interior volume of 1,400 m³ will make it the largest tokamak vessel ever built. The plasma will occupy 840 m³, over 10 times more than in the present largest operating tokamak in the world. When D-T fusion reaction takes place inside, neutron fluxes as much as 1021 neutrons per second can be expected. This will cause the activation of the chamber, so all the maintenance for inside the vessel has to be done remotely. The in-vessel components installed inside the vacuum vessel are a divertor, which collects helium ash and impurities from fusion plasma, and blanket, first-wall modules protecting vessel from plasma and serving for heat removal. At later stages of experiments, some blanket modules will be used to study a tritium breeding concept. The vacuum vessel has double walls between which blocks of in-wall shielding are inserted. These blocks, weighing from 50 kg to 500 kg each, will provide neutron shielding for components located outside the vacuum vessel (e.g. magnets) and also improve plasma performance by limiting instability, called field ripple, which can produce potentially damaging hot spots to the first wall. The in-wall shielding blocks are also provided with channels through which cooling water will flow and remove excess heat generated during fusion reactions. The outer side of the vacuum vessel is covered by a thermal shield consisting of stainless steel panels with a low emissivity surface (< 0.05) made of a thin silver coating; about 800 kilograms of silver was used for thermal shield covering. The shield is actively cooled by helium gas flowing through cooling tubes welded on the panel surface. The thermal shield has to minimize thermal load transfer from a hot vessel to magnets operating at 4 Kelvin temperature. Another layer of thermal shield will be installed between the magnets and the cryostat. 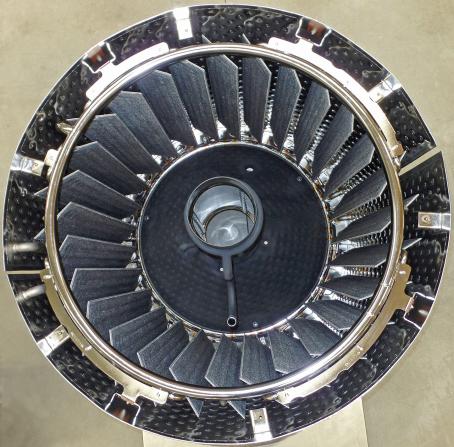 Because the vessel is inside a toroidal magnet structure and also hidden inside cryostat, no one will ever see it in its entirety, but if it were possible, it would look like a donut full of rectangular holes. These are ports, forty-four openings providing access for remote handling operations, diagnostics, heating, and vacuum systems. For example, neutral beam injection will take place at an equatorial level, on the lower level, five ports will be used for divertor cassette replacement and four for vacuum pumping.

As the word “vacuum” suggests high vacuum is needed to be maintained inside the vacuum vessel. Most important is to remove impurities like carbon or oxygen that could cause radiation losses from hot plasma. During fusion reactions the pumps will remove helium ash and gather tritium that will be later collected from pumps and returned as fuel. This is ensured by a combination of mechanical pumps and powerful cryopumps capable of creating low density of about one million times lower than the density of air. There are six torus pumps, four pumps for neutral beam injection assembly used for plasma heating, and two for cryostat. To exhaust the whole ITER vessel will takes at least 24 hours. The cryopumps are based on cryopanels, cooled with supercritical helium and coated with activated charcoal as sorbent material can trap helium or tritium atoms. Research shows that charcoal from finely ground coconut shells works best because it has the right density and porosity. So the ITER is stocked with enough coconuts to supply it through the whole duration of an experimental campaign. One part of the vacuum vessel.