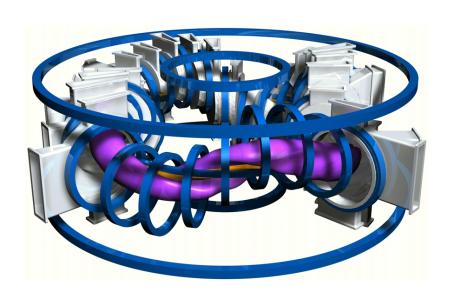 When talking about magnetic confinement in thermonuclear fusion, two terms are usually mentioned: toroidal and poloidal. To explain them, let’s imagine a donut. This shape is technically called a torus. If you take a walk around a donut, starting in the donut hole, then through a place where there is icing on the real donut, to the outer side, and finally back to the donut hole, this direction will be called toroidal. Rings on the donut corpus are toroidal coils. The Poloidal walk will take you around donuts — for example, along the edge of the icing. Poloidal coils have the same orientation as your donut and are kind of hoops strung on the donut. The magnetic field created by toroidal coils has the shape of a torus. Poloidal coils are creating a field that pushes expanding plasma back to the centre of the torus.

The third type of coil is required in a stellarator, either in the form of a spiral turning around a torus (helical coil) or in the form of separate modular coils of a special non-planar shape. These coils are accompanied by either poloidal or toroidal coils, or both, according to stellarator configuration. Helical coils are a bit easier to calculate and manufacture as they are symmetrical, but because they are wound around the vacuum vessel, there is not much space between them to reach the vacuum vessel. In most devices, two pairs of helical windings are used, so the free manipulation space is even more limited. Separated modular coils allow a little better access to the chamber. They are not simple round coils — their shape is crooked in order to achieve the best magnetic confinement possible. Though around one stellarator there are several dozen coils, the effort is to use only about five types of modular coils to make manufacture easier and less costly. So the device usually has five-fold, four-fold, or even three-fold symmetry with repetitive sets of modular coils. 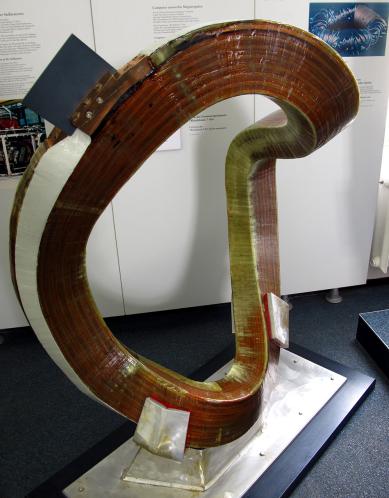 Magnetic coil of Wendelstein 7-AS stellarator.

The shapes of the coils have to be computed with powerful supercomputers. That’s why stellarators have experienced a boom only recently when enough computational power was available. First, the optimal shape of the plasma is calculated. The aim is to achieve the best confinement possible, reduce particle losses, and the formation of instabilities or unwanted magnetic islands. Then, using a custom algorithm, coils are created where the resultant field best matches the desired shape of plasma. Limitations, such as the number of coils and the possibility of engineering the created shape, are added. Manufacturing requirements are enormous — a few millimetres of deviation could spoil the resulting magnetic field entirely. As the coils need to be placed with millimetre accuracy, a strong supporting structure is needed that will hold the magnets in the proper place during the whole operation. By changing the current flowing through the coils, operators could set several different types of magnetic configurations. To reduce energy consumption, the coils are superconducting. This means that they are made from a material that uses quantum effects of superconductivity where electrical resistance vanishes and magnetic flux fields are expelled from the material when cooled below a critical temperature of around 4 kelvin (−269 °C). Superconductive magnets carry a higher current and produce stronger magnetic fields, consume less power, and therefore are cheaper to operate than their conventional counterparts. Stellarator coils are made from NbTi (niobium-titanium) superconductor, which is easy to work with (a feature necessary for the production of such a complicated shape) but loses its superconductivity in higher magnetic fields, which limits its usage in devices where a strong magnetic field is necessary. Present stellarators produce a magnetic field of around 3 Tesla. If usage of the stellarator as a power plant required a higher magnetic field, another superconducting material, such as ReBCO, would have to be used. ReBCO is an acronym for rare-earth barium copper oxide, and this new material exhibits high-temperature superconductivity and could sustain high magnetic fields. These properties could make it a candidate for usage in future stellarators or other magnetic confinement devices. The operation of a stellarator usually requires the presence of several other types of coils, for plasma shaping, positioning, and measuring its properties.

In present day stellarators, the magnetic coils are packed as close to the vacuum vessel as possible. But when deuterium-tritium fusion is ignited inside, a heavy flux of neutrons starts to attack the precious coils. This will require heavy shielding. Neutron flux will also serve for tritium breeding when lithium inside the breeder captures neutrons and produces an atom of tritium. But the one-meter-thick breeder will push magnetic coils away from the vessel wall, so for plasma confinement, a stronger magnetic field will be needed than before.