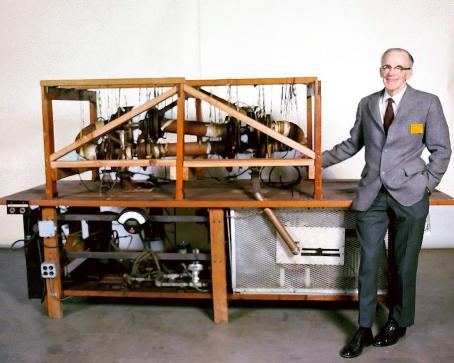 The idea of stellarators is older than that of tokamaks. Lyman Spitzer came up with it in 1951 (the word is out that it was while skiing in Aspen). His first construction of a stellarator was a tube of borosilicate glass bent into the “8” shape with magnetic winding around it. This Model A was built in 1953 in the Princeton Plasma Physics laboratory (Project Matterhorn at the time) and demonstrated that plasma could be created and confined that way. A Model B series was then designed, still in “table-top” size. On B-1, ohmic heating was used to reach temperatures of about 100,000 Kelvin, but the duration of the pulse was shorter than expected. Its successor has the shape of a figure “8” with squared corners, which leads to the cryptic name B-64 (8 squared is 82, which equals 64). This model, completed in 1955, was equipped with a divertor, which improves the purity of plasma and decreases heat loss. After the Model B series, the larger machine, Model C, was built in 1962. For the first time, the injection of neutral particles generated by a particle accelerator was used for heating in 1964. This method is now widely used and is known as Neutral Beam Injection (NBI). In 1969, the Model C reached about 5 million kelvin.

Unfortunately, the larger the stellarator machines, the poorer the confinement. The particles were escaping at an even higher rate than was predicted by the Bohm formula. It seems that if the problem cannot be overcome, the stellarator will be of no use as a power plant. Because of the success of the tokamak concept, the decision was made in 1969 to rebuild Model C to tokamak ST (Symmetric Tokamak). But scientists believe that troubles with confinement time could be solved and research on stellarators flourish in the 60s and 70s all over the world. A simpler design of torsatron was invented (helical winding around a toroidal chamber completed by poloidal coils) and the first device of this type, Saturn-1, started its operation in 1970 at the Kharkov Institute of Physics and Technology, followed by several other devices, of which Uragan III was the first torsatron equipped with a divertor. A similar design of heliotron was explored at Kyoto University, Japan, in the Heliotron series, testing the combination of helical, toroidal, and vertical field coils. In Culham, the PROTO-CLEO device showed that stellarator confinement could be better than that given by the Bohm formula, and ohmically heated plasmas on CLEO showed that parameters similar to those of tokamaks could be obtained. Despite the progress, it was still clear that the magnetic configuration of stellarators is not perfect and should be improved. Advances in plasma theory, engineering, and supercomputing, in particular, were awaited.

In 1988, the first stellarator with modular non-planar coils, Wendelstein 7-AS, started operation in Garching, Germany. A computer generated bizarre shaped magnetic coils bring the plasma shape of a twisted ribbon closer to an optimal magnetic configuration. It was still not perfect, but it showed the way to its successor, Wendelstein 7-X. It was also the first stellarator equipped with an island divertor. In Japan, the Large Helical Device with heliotron configuration started operation in 1998 and one year later joined the stellarator family HSX (Helically Symmetric eXperiment), the first modular stellarator with a quasihelically symmetric field and improved particle confinement. In 2006, a long-pulse plasma discharge of more than 30 min. duration was achieved on the Large Helical Device with total injected heating energy of 1.3 GJ. The first plasma in Wendelstein 7-X, a huge modular stellarator with superconducting coils located in Greifswald, Germany, was ignited in 2015. After two years of experiments, it broke the world record for fusion products. This is a product of ion temperature, plasma density, and energy confinement time and specifies how close one is getting to the reactor values needed to ignite a plasma.

At an ion temperature of about 40 million degrees and a density of 0.8 × 1020 particles per cubic metre, Wendelstein 7-X has attained a fusion product affording a good 6 × 1026 degrees per second per cubic metre. In 2017, Wendelstein 7-X reached a particle density of up to 2 × 1020 particles per cubic meter — values that are sufficient for a future power station. Ion and electron temperatures exceeded 20 million kelvin, and plasma energy stored exceeded 1 megajoule. Its plasma pulses lasted over 100 seconds. In the same year, LHD exchanged hydrogen for deuterium and in deuterium plasma generated an ion temperature of 120 million Kelvin. In 2018, it reached a record in pulse length of over three-quarters of an hour (2,859 seconds) and another record in energy injected into the plasma of 3.36 GJ.