Home
Thermonuclear Fusion
Stellarators
Most important stellarators in the world

Most important stellarators in the world 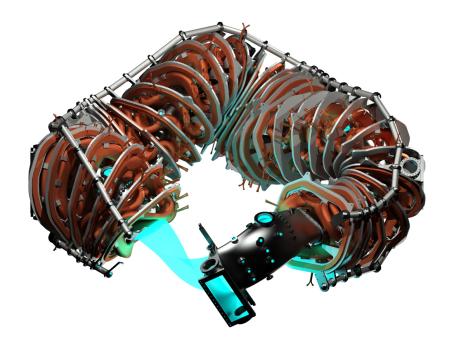 There are over ten stellarators operating around the world. The largest are Wendelstein 7-X in Germany, the Large Helical Device in Japan, and the Helically Symmetric eXperiment (HSX) in the USA.

Wendelstein 7-X, the bigger successor of Wendelstein 7-AS, is an experimental device of the Max Planck Institute for Plasma Physics located in Greifswald, Germany. It successfully ignited its first plasma at the end of 2015 and its aim is to investigate the properties of plasma held for 30 minutes with a maximum heating energy of 18 GJ. This means 10 MW over half an hour. Since then, Wendelstein 7-X has reached 20 million degrees Celsius and discharge times of up to 100 seconds with a heating energy of 200 MJ. After large improvements, during which first wall carbon tiles will be replaced with water-cooled carbon-fibre-reinforced-carbon tiles for better heat removal, the desired half-hour long pulse is anticipated.

Wendelstein 7-X is a modular stellarator composed of a set of 50 non-planar superconducting coils surrounding the vacuum vessel and creating a twisted magnetic cage. Each coil made from niobium-titanium weighs about 6 tons and is about 3.5 metres high. They are cooled by liquid helium to 4 Kelvin and are capable of producing magnetic fields of up to 3 Tesla. The magnetic field they generate has a five-fold symmetry. Hence, the plasma is therefore not exactly circular but resembles a pentagon. This is because the magnetic system is made up of five identical modules. Each module contains ten coils, two of which have the same shape but are arranged upside down. In total, the coil wreath is made up of only five different types of coils. The chamber has an outer diameter of 16 m, a height of about 4.5 m, and a nearly circular cross section of 4.5 m in diameter. The whole machine weighs 725 tons. A plasma volume of 30 m3 is heated by the combined effects of Neutral Beam Injection (NBI) and Electron Cyclotron Resonance Heating (ECRH), with a total heating power of 14 MW. Record stellarator values were achieved at Wendelstein 7-X for the energy stored in the plasma. With strong microwave heating, the energy content of the plasma exceeded one megajoule for the first time without the vessel wall becoming too hot. 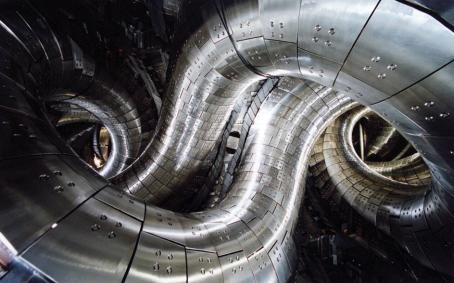 The Large Helical Device belongs to the Japan National Institute for Fusion Science and is located in Toki, Gifu prefecture, Japan. It is a stellarator record holder with a plasma temperature reaching 120 million Kelvin and a pulse duration of nearly one hour. The magnetic cage for its heliotron configuration is created by a pair of helical external coils wrapped around a toroidal vacuum vessel. This configuration is completed by three pairs of poloidal coils. The resultant magnetic field gives plasma inside the shape of a twisted ribbon. The first plasma was ignited in March 1998. The major plasma radius is 3.9 metres and its volume is 30 m3. With a total heating power of 36 MW, the heating serves various heating devices such as neutral beam injection (NBI), ion cyclotron radio frequency heating (ICRF), and electron cyclotron resonance heating (ECRH). The device weighs approximately 1,500 tons, and has an outer diameter of 13,5 metres and a height of 9,1 metres. One helical coil weighs 120 tonnes and is capable of generating a magnetic field of 3 Tesla. Since accuracy in constructing the helical coils was very important, it was decided that the plasma vacuum vessel should be assembled after the installation of the helical coils. Thus, the vacuum vessel was divided into 140 parts and welded after both helical coils had been placed.

The Helically Symmetric eXperiment is located in the Electrical and Computer Engineering department at the University of Wisconsin-Madison, USA. It is not as big as its German or Japanese counterparts, but it is the only device in the world that has a magnetic field structure that has been termed Quasi-Helically Symmetric. This means that its magnetic cage is axisymmetric and this provides great particle confinement, so particles escape less frequently and stay in the plasma so they can be heated up to thermonuclear temperatures easily. The magnetic field is generated by a set of 48 coils arranged into four-fold symmetry. Their shapes were designed by a computer to optimize them for the generation of quasi-helically symmetric fields. A plasma volume of 0.44 m3 is heated by two gyrotrons (ECRH — Electron Cyclotron Resonance Heating) with a total heating power of 200 kW. A maximal plasma temperature of up to 30 million kelvin was reached.