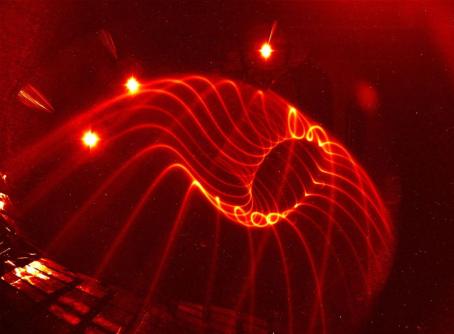 Experimental visualization of the field line on a magnetic surface in Wendelstein 7-X.

The idea of a magnetic cage is that a particle is trapped on one closed magnetic surface (depicted by a single magnetic line), spiralling endlessly. Theoretically, the particle will stay on that closed magnetic surface forever and never escape, but the reality is different. With many particles spiralling close together, collisions sometimes occur, which fling particles out to other magnetic field lines. After such a collision, particles sometimes found themselves closer to the plasma core, which is desirable, but sometimes found themselves closer to the stellarator walls. By gradual collisions, some particles will finally escape the magnetic confinement and end up on the device wall. The problem is not that the particle is missing — it can be easily replaced by fuelling — but the escaped particle takes all the laboriously delivered energy with it. This energy ends up useless on the vacuum vessel wall and the newly added particle has to be again heated by an external heating device. If too many particles are escaping, the plasma cannot be heated to thermonuclear temperatures and such a device is useless as a power plant.

The fact that the particles are moving from one magnetic surface to another is called diffusion, and the whole process of particles escaping from magnetic confinement is called transport. This is a very important topic in fusion science — if the transport did not exist or was very low, we would’ve reached ignition a long time ago. For the first stellarator, the diffusion rate was predicted as “classical” (this theory counts only with random particle collisions in an infinite long cylinder). But the diffusion rate was many times worse. It was worse than “neoclassical diffusion” (counting the toroidal magnetic field shows that particles have more ways to escape from the cage; this theory was developed in the 60s) and worse than “Bohm diffusion” (under certain conditions, particles stop “seeing” the magnetic field and are able to move across magnetic lines almost freely, resulting in rapid particle loss). The diffusion rate in the first stellarators, namely the series of Model B and Model C in the Princeton Plasma Physics Laboratory, was so bad that it seems that these concepts of magnetic confinement will never be of practical use. After the fine-tuning of magnetic fields and ways of heating, the Bohm diffusion rate was finally achieved, but for many decades, stellarators fought with poor particle confinement. Their magnetic cage, created by external fields only, was not perfect. Only when plasma theory, computing, and engineering advanced to a certain point was it possible to not only calculate but also manufacture magnetic coils capable of producing tailored magnetic fields. After that, stellarator plasma confinement improved dramatically, and modern stellarators are able to keep and heat plasma particles to fusion temperatures.