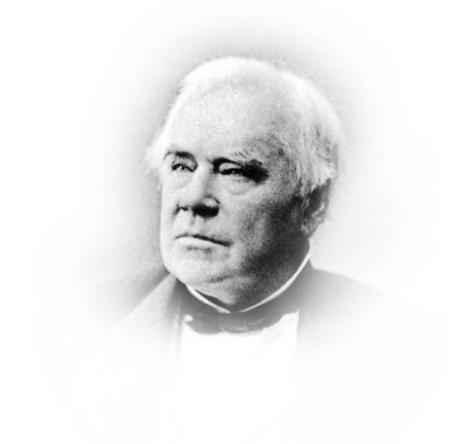 James Francis was a British-American engineer and founding member of the American Society of Civil Engineers (ASCE). As a matter of fact, his water turbine was the result of attempting to perfect the Fourneyron turbine from 1826. The improvement consisted of adding the guide vanes (or wicket gates) to regulate the rate of flow. In this way, the turbine was able to run at a constant revolution frequency and drive the electric generator regardless of changes in the rate of flow. The guide vanes were controlled by a centralized system that allowed simultaneous setting change for all vanes. Francis used a very novel modelling method for calculating the shapes of the vanes. The calculating procedures developed by him are still applicable today in turbine design. After numerous improvements and the addition of the guide vanes, the turbine saw broad use around the world.

The Francis turbine is a reaction turbine which means that the working substance, during its way through the turbine, changes pressure, whereby it loses its energy to the runner. It has a radial-axial design and guide vanes are variable pitch but the runner blades are fixed.

The water volume entering the turbine per time unit (i.e. rate of flow) can be controlled by adjusting the pitch of the guide vanes. After passing the guide vanes, the water gains the necessary velocity and is directed toward the fixed blades of the runner. Here the water gives up its kinetic and pressure energy, and leaves the runner, parallel to the turbine axis, through the draft tube.

Francis turbines designed for generating electricity with an efficiency exceeding 90% are suitable for heads between 20 and 700 meters and their output ranges from a few kW to 1,000 MW. The runners of Francis turbines installed in the biggest hydroelectric power plants in the world can have a diameter of more than 10 meters. This is a very common turbine type and is frequently used in pumped-storage hydroelectric power plants. Using the analytic methods developed by J. Francis, it is possible to design efficiency-optimized turbines to suit the specific conditions of the installation.

The biggest Francis turbines were made for the Three Gorges hydroelectric power plant in China. The runners have a diameter of 10 m and an output capacity of up to 760 MW.