The ITER is an experimental device designed to demonstrate the possibility of harnessing energy from thermonuclear fusion. It is being built in Saint Paul-lez-Durance, France and is supposed to start operation in 2026. During the experimental stage, it will fuse deuterium and tritium atoms releasing 10 times more energy than was needed to ignite the thermonuclear reaction. The energy will not be used for electricity production, but results from the ITER experiments will pave the way for the first fusion power plant. In such a plant, called DEMO, the thermal energy of fusion will heat water and turn it into steam that will drive turbine and generator — in the same way that thermal power plants do. Deuterium-tritium fusion occurs at an incredible temperature of 150 million Kelvin, more than is in the core of the Sun. The ITER will reach and maintain such temperature in the tokamak. This is a device with a toroidal chamber (donut shape) where hot plasma is confined inside a magnetic cage generated by huge toroidal magnets encircling a vacuum vessel. The ITER vessel will measure 19.4 metres across, will be 11.4 metres high, and will weigh approximately 5,200 tonnes. The cross-section of the chamber is elongated to the shape of a “D”. The interior volume of 1,400 m³ will make it the largest tokamak vessel ever built. The vessel will contain 840 m³ of plasma. The main magnetic field will be created by eighteen toroidal coils, each 17 metres high and weighing 360 tonnes. They will generate a maximum magnetic field of 11.8 Tesla. The total magnetic energy will be 41 gigajoules. Coils will be made from superconducting Nb3Sn alloy and cooled to 4 Kelvin (−269 °C) to reach and keep a superconductivity state. The current flowing through the plasma will be initiated by central solenoid, 13 metres tall, 4 metres wide, weighing one thousand tonnes. It will be capable of generating a maximum field of 13 Tesla. During operation, very strong electromagnetic forces will act on the solenoid trying to tear it apart, two times stronger than the force behind the thrust of a Space Shuttle lift off. Plasma heating will be ensured by ion and electron cyclotron heating and by three neutral beam injection machines, each steam-locomotive-sized and nearly bigger than tokamak itself. The ITER will generate long pulses of 400 to 600 seconds during which fusion power of about 500 MW is estimated to be released. The vessel’s inner side, called blanket or first wall, will experience extreme neutron bombardment and heat fluxes ten times higher than heat experienced by a spacecraft re-entering the Earth’s atmosphere. But the amount of neutrons produced during reaction will also do something very important and useful. As there are not enough tritium reserves on Earth for commercial fusion plant operation, the ITER will test the tritium breeding blanket that will create tritium from lithium via neutron capture. 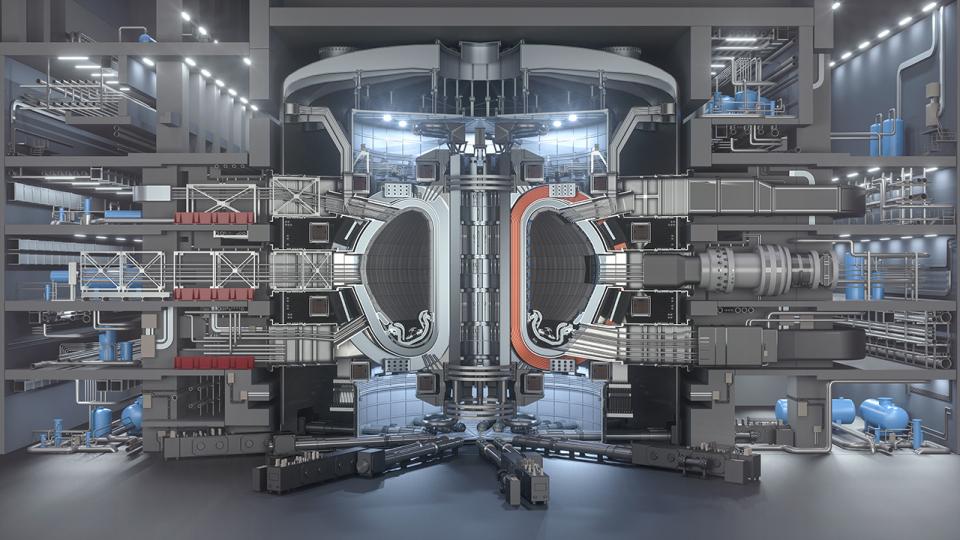 The ITER is one of the most ambitious projects since the development of the International Space Station, and the Large Hadron Collider. It is also the most complicated engineering and collaboration project, where parts measuring many metres and weighing many tons are constructed in different countries but have to be fitted together with sub millimetre accuracy. Corresponding to such a challenging task is the budget — the ITER is now expected to cost at least  billion.