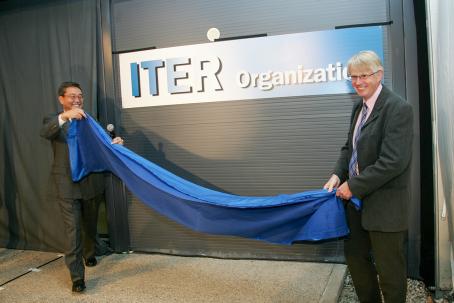 ITER Organization was established in 2007.

In the beginning of the 20th century, the potential energy of the atom was discovered. And while fission was mastered and used for peaceful energy production as well as misused in atomic bombs, fusion resisted and was never developed in a way that could serve as a source of useful energy. Scientists from all parts of the world tried very hard and their effort gave rise to plenty of fusion devices — Z-pinches, fusors, stellarators, tokamaks, inertial confinement and many others. As energy consumption of humankind grew, so did the need for another source of electricity. Such a source should be renewable—or not be exhausted for millennia. Such a source should not produce any emissions, whether CO2 or other, problematic waste, nor radiation or toxins. Its fuel should be distributed evenly on Earth and have sufficient energy density. Thermonuclear fusion could be such a new, clean, more sustainable source of energy, so no wonder that developed nations supported its research. The idea of international collaboration was proposed at the Geneva Superpower Summit in November 1985 by General Secretary Gorbachev of the former Soviet Union to US President Ronald Reagan. As tokamaks seemed in those days as the most promising devices, it was decided that the tokamak concept would be used. Only one year later, the European Union (Euratom), Japan, the Soviet Union and the USA agreed to build a large international fusion facility, ITER. Its name came from an acronym of International Thermonuclear Experimental Reactor, but it also means “way” in Latin as ITER could be the way to new clean source of energy. Because research to date has shown that it is easiest to maintain fusion in greater plasma volumes, ITER bet on size and with its 840 m3 of plasma will be the biggest tokamak ever built. The largest operating tokamak, JET, has only 100 m3 plasma volume. After many turbulent years of creating a final design, and political negotiations, the ITER Agreement was signed in 2006 by ITER Members (finally, there were seven of them: the People’s Republic of China, the European Atomic Energy Community (Euratom), the Republic of India, Japan, the Republic of Korea, the Russian Federation and the United States of America) and a site at Saint Paul-lez-Durance was chosen for ITER. In 2007 construction work began.

Despite its enormous size, budget and countless technical challenges, the ITER will not be a power plant. Lots of theories about plasma behaviour can only be verified or refuted experimentally on plasma with volume and temperature similar to conditions that will be used in the power plant. The aim of the ITER is to prove such concepts. The ITER will generate about 500 MW of fusion power from only 50 MW of external heating power, so more energy will be for the first time gained than put into the reaction. The potential for reaching a burning plasma state (when fusion reaction generates all necessary heat; no external heating is needed) will be shown and ways of effective heat removal from a vacuum vessel will be explored. The ITER will also probe the possibilities of tritium generation by neutron capture in lithium, this so-called tritium breeding should be a way to generate enough fuel within the reactor of a fusion power plant; the second component of fuel is deuterium — element abundant on Earth. Many technologies and manufacturing processes will be developed and tested during ITER construction as well as diagnostics and plasma control during experiments. New materials, for example first-wall blanket or vacuum vessel, will be tested in extreme conditions of high thermal loads and radiation. All gained knowledge will be then used in the construction of the fusion power plant. Last but not least, the ITER will demonstrate that the fusion power plant could be operated safely with negligible consequences to the environment.