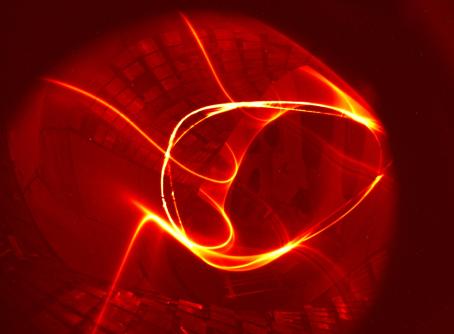 Thermonuclear fusion takes place between hydrogen atoms, but plasma is never so pure. Impurities — atoms with higher atomic numbers — get into plasma by various means, for example, from the vessel walls. Those impurities could cause great radiation losses and undesirably cool the plasma. Also, no matter how good the magnetic confinement is, some particles will escape from the magnetic cage all the time. All those particles, impurities as the refugees, are better ollected in the same place, cooled, and evacuated from the vessel. For this purpose, devices called divertors are used to control the purity and density of the plasma. In the core of stellarator plasma, the magnetic field is forming closed surfaces — that means that if the particle were alone in the vessel, it would stay trapped on this surface and never move inward or outward. The magnetic surface near the vessel wall is a special one and is called the last closed surface. It delimits the area of the core, where particles are confined. The space between the last closed surface and the wall is called the “Scrape-Off Layer”, and it is better to keep it free of particles that could otherwise heat up the vessel wall. But the magnetic field still exists beyond this line. In a stellarator, it could be arranged to form small islands — local magnetic traps where particles are captured. It is then easy to put them in the way special collector plates (another word for divertor) and exhaust these trapped particles by vacuum pumps beneath the plates. Because it exploits magnetic islands, this device is called an island divertor. 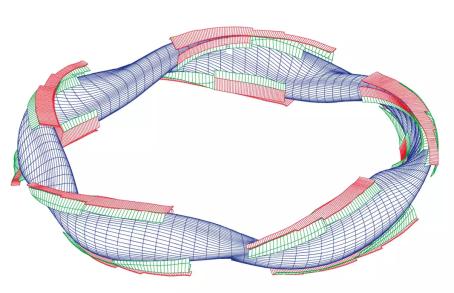 The divertor shape is very complicated as it has to follow the curved contour of the plasma edge. It is made from small tiles of carbon-fibre-reinforced-carbon (such as in the Wendelstein 7-X stellarator) welded on the backbone and infused with water-cooling piping. The surface of each tile had to be milled three-dimensionally into shape — with tolerances of sometimes only 0.1 millimetres to avoid any overheating of protruding edges. They have to withstand a similar heat load during a plasma pulse as spacecraft re-entering the Earth’s atmosphere are experiencing. Since the magnetic field lines in the scrape-off layer, which approach the last closed flux surface, only connect to certain wall regions, the target plates do not have to cover the whole plasma surface.

Though the first stellarator equipped with a divertor was Model B-64, completed in 1955, research on stellarator island divertors started just recently.