The advancement of human civilization depends on energy. All progress and technology that is making our lives easier needs energy. The more advanced our civilization is, the more comfortable our lives are and the more energy we need to sustain this state and to further develop it.

Energy Consumption Estimates by Sector, 1949—2010 (Trillion Btu). A British Thermal Unit (BTU) is the amount of heat energy needed to raise the temperature of one pound of water by one degree F. This is the standard measurement used to state the amount of energy that a fuel has as well as the amount of output of any heat generating device.

In the last century, humankind has made unprecedented progress, the speed of which is unmatched by anything in the history of our species. At the same time, more energy has been used to power this progress then had been consumed in all previous ages combined. The great majority of this energy was produced from non-renewable fossil fuels which currently fuel 65% of the energy production in the world. As the term suggests, non-renewable resources are not inexhaustible. The reserves are estimated to last a few decades, a century at the most. And without them, we have a big problem on our hands. 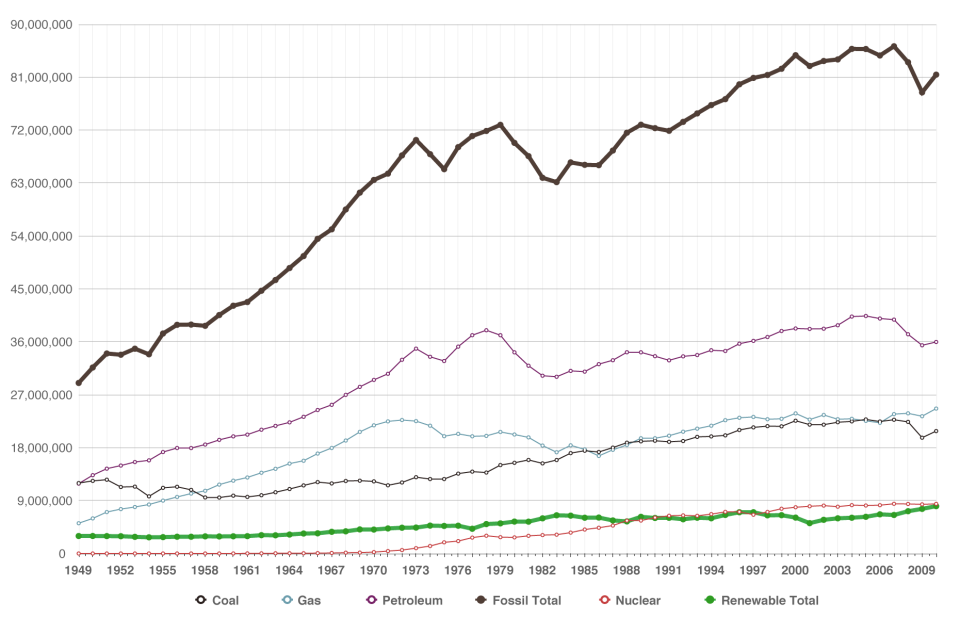 Furthermore, the rate of growth of energy consumption grows, too. In the last 27 years, it grew by 2% every year. Optimistic estimates state that in the next few years the rate should finally slow down to 1.2% a year. But even then, this would mean that by 2035 energy consumption will increase by 36% as compared to 2008. Instead of the current 450 EJ, we will need 740 EJ.

Energy consumption growth is not nearly evenly spread over the globe. The OECD (The Organization for Economic Co-operation and Development), which represents the 34 economically most advanced countries in the world, expects energy consumption to grow by 14% in member states in 25 years, while other countries are expected to experience a growth of up to 93%. The single most massive increase will be that of China, which is expected to increase its demand by 75% by 2035 as compared to 2008.

This great thirst for energy will have to be quenched somehow. At the same time it will be necessary to keep in mind the long-term sustainability of proposed solutions. The new energy sources should not only supply us, but future generations as well.

The energy demands of humankind will be met prevailingly by burning fossil fuels for many years to come. We will gradually move on from oil to gas and coal may yet play an important role if climate change restrictions will not interfere. Renewable energy sources will become increasingly important and may account for up to a third of the world’s energy production in twenty-five years.

The main source of energy of our civilization is fossil fuels. Their reserves are not inexhaustible. If consumption keeps growing at the current rate, peak oil production will be reached in 2020 and natural gas and coal will follow.

Nevertheless, fossil fuels still play a major part in meeting the future’s energy needs. Renewable sources of energy which could replace energy production from fossil fuels are developing too slowly to be able to fill a large portion of the market within just a few decades.

Natural gas consumption will probably grow the fastest because it is easy to transport and its combustion has a relatively low impact on the environment. From all the fossil fuels,  natural gas releases the least carbon dioxide greenhouse gas when burnt. Gradually the consumption of natural gas then should recede as it will be replaced by nuclear energy and renewable energy sources.

Liquid fuel consumption will grow the slowest due to the impending peak of production. Petroleum production will, nevertheless, be higher than the production of any other fossil fuel. Transportation will consume increasing amounts of energy and this growth will be the highest in non-OECD countries.

An important, growing portion of the market will be filled by coal, unless its consumption will be regulated by some policy, e.g. for climate protection.

In the last century, not only energy consumption has grown. The human population grew from one billion to almost seven billion. Resources however are not spread evenly among the population. A minority is still consuming the majority of the energy produced in the world. The demand for energy grows and it will continue to reflect the increase in the world’s population. If the poorer majority of the population is to reach the living standards of the richer minority, energy sources will have to be significantly expanded.

The progress of our civilization which made our lives more comfortable, safer and longer is accompanied by a steady increase in the world’s population. While in 1900, only a little over one billion people were living on the Earth, a hundred years later, that number has exceeded six billion and there is nothing to suggest that this growth could slow down or even stop.

If we divide the world’s yearly energy production of 450 EJ by 7 billion people, we will get 64 GJ a person, which is corresponding to 2 kW. If the population increases at a rate of two or three people a second, than in a day it has grown by roughly 273,000 and to meet their energy demands, a new 1,000 MW power plant would have to be built every other day.

The above calculation is a little flawed since energy consumption is distributed very unevenly over the world. A popular quote states that 20% of the population consumes 80% of the world’s energy resources. Thus most of the people never consume their 64 GJ, while a few consume significantly more. The problem is that this poor majority would also like to reach consumption levels of the rich minority. 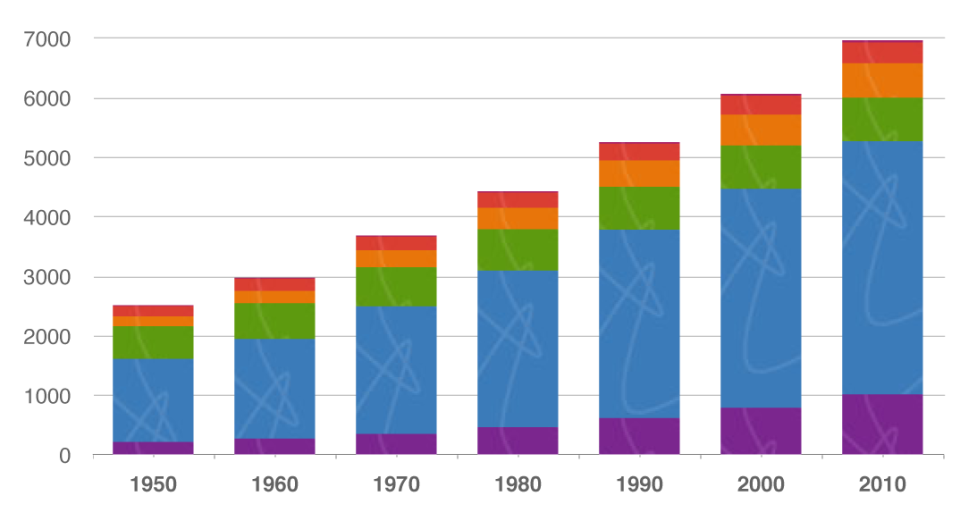 Estimated regional populations since 1950 (in millions).

A large part of Africa has no grid connection, or a grid for that matter, and an estimated 70% of the African population has no access to electricity whatsoever. 37% of the world’s population still get energy from burning wood or dried faeces. All these people would rather enjoy the standards of living of a European or an American and if they would, global energy consumption would grow to a staggering 2,200 EJ.