As deuterium-tritium fusion occurs at temperatures exceeding 100 million degrees, the necessity to confine such hot substance arises, and a magnetic cage seems like a possibility. Plasma is made up of electrons and ions, which, as charged particles, obey magnetic fields. When a charged particle encounters a magnetic field, it starts to spiral along these magnetic field lines. Ions spiral in slightly larger circles (known as the Larmor radius) and in the opposite direction as electrons. When parallel magnetic field lines are offered, plasma particles travel in one dimension only and create a column of hot plasma isolated from the walls of the device. Such a field exists in the core of a solenoid, but unfortunately, all solenoids are of limited length, and particles that reach its end escape. The idea is to bend the solenoid into a torus (donut shape) so the particles will circle endlessly round and round. For pure geometrical reasons, the coils of the solenoid on the inner side of the torus (in the donut hole) will be closer to each other, so the magnetic field will be stronger there than at the outer edge of the torus. Particles in a gradual magnetic field will start to move across the field lines. Electrons drift down and ions up, so gradually the charges will separate and the resulting electric field will overcome the magnetic one and push the plasma out of the torus. To overcome this, the particle must be forced to spiral around the torus. When travelling on the inner side, it will drift in one direction, while on the outer side, it will drift in the opposite direction, so the drifts cancel out and plasma stays inside the torus.

The electrons and the ions in the magnetic field.

As the particle travels and twists around the torus, you can imagine its path as a three-dimensional figure “8”. To build a device in such a shape was exactly the idea of the first stellarator created by Lyman Spitzer in 1953. It was a tube of borosilicate glass bent into the “8” shape, wrapped by magnetic coils. Because the straight tubes could not pass through each other, the design did not lie flat. The bent parts at either end were tilted. This is called the “figure 8 stellarator”. From it, a simpler “racetrack” design evolved. This stellarator has an oval shape with toroidal winding and additional corkscrew winding to provide the required magnetic twist. So-called “classical stellarators” are derived from it. These have a toroidal shape of a chamber with toroidal coils around them. Corkscrew winding wraps itself around torus inside them. Current in adjacent wires of these winding flows in opposite directions. “Torsatron” creates its magnetic cage by one or two single helical coils spiralling around a torus completed by several poloidal coils. 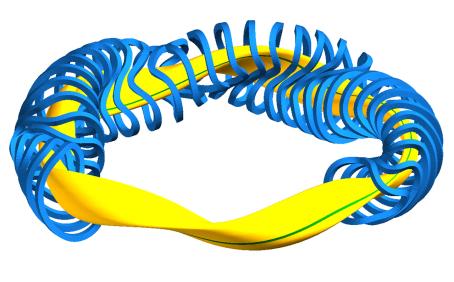 The plasma and the magnetic coils in the modular stellarator.

Very similar is the “heliotron” design. The “heliac” uses a set of off-axis toroidal coils completed by several poloidal coils to create a twisted magnetic field with a bean-like cross-section. With progress in computing, plasma theory, and technologies, it was possible to manufacture odd-shaped modular coils, crooked into bizarre shapes that could give plasma exactly the desired shape of a twisted ribbon with a changing bean-like cross-section. This “modular stellarator” design, also called “Helias”, seems to be the most promising type of stellarator device with very good confinement.

The modular magnetic field is activated first in a stellarator discharge, creating a magnetic cage. Then gas (usually hydrogen) is puffed into the vacuum vessel and is heated by high-frequency electromagnetic waves that pass energy to the electrons. The accelerating electrons transfer their energy to ions through collisions, thus ionizing plasma completely. Another possibility for plasma heating is neutral beam injection, in which accelerated neutral particles are fired into plasma, passing their energy to plasma particles. The plasma can be confined as long as the heating is available, so in principle, the stellarator could operate in a steady-state regime.