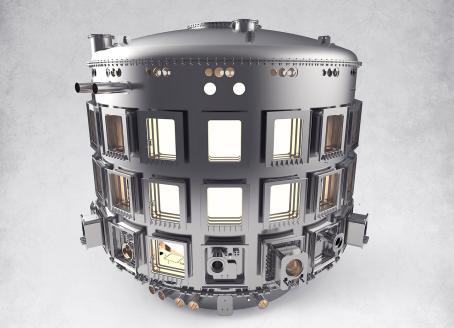 During ITER operation the 150 million Kelvin hot plasma core will be just a few meters away from only 4 Kelvin cold toroidal magnetic coils. Their extreme coldness is necessary for superconductivity and the creation of magnetic fields that hold the extremely hot plasma. In order to minimize heat transfer from plasma to coils the whole system is enclosed in a big vacuum chamber, the largest thermos ever build, called cryostat. The vacuum vessel itself is protected by a thermal shield actively cooled to −193 °C and the vacuum in cryostat will keep the heat transfer from vessel to liquid helium cooled coils as low as possible. This enormous stainless steel cylinder is nearly 30 metres wide and as many in height. The internal diameter of the cryostat has been determined by the size of the largest component it surrounds: the two largest poloidal field coils. Cryostat’s internal volume is 16,000 m3 and the high vacuum is maintained by a system of two vacuum pumps creating continuously vacuum pressure of 1 × 10−4 Pa. The whole structure weighs 3,850 tonnes. There are some 280 penetrations in cryostat, some of them more than four meters wide, for allowing maintenance, to provide access for piping, electricity, heating, diagnostics and a remote handling system that will manipulate, for example, eight-ton divertor cassettes or four-ton blanket modules. Each one of these openings will have to be as leak-proof as possible to preserve the cryostat’s vacuum environment. But during operation the vessel will experience thermal contraction and expansion and also cryostat can shake a little because of extreme forces that will act on it during the switching of superconducting magnets. Fixed connections would be in at risk of cracking, therefore eighty-five large, rectangular bellows are situated on the connection between cryostat and vessel and between cryostat and the Tokamak building itself.

Manufacturing the base section of the cryostat. 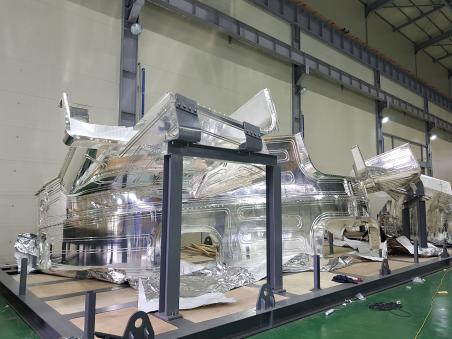 The cryostat is made up of 54 segments that will be welded and assembled on-site. The first part of cryostat, the 1,250 tonnes base section, will be the first large component installed in the Tokamak Pit. Then the other parts will be gradually assembled as the works continues and the last part of cryostat, a 600 ton heavy lid, will be the last large component set into place after the installation of the vacuum vessel, magnets, thermal shielding and central solenoid. Besides thermal insulation, the cryostat has also a supportive function as it is connected to the ITER machine and in this way is part of a structural assembly. The concrete and steel pedestal that supports it was measured for a total mass of 23,000 tons — the 3,850 tons of the cryostat itself as well as the 18,900 tons of the ITER machine. 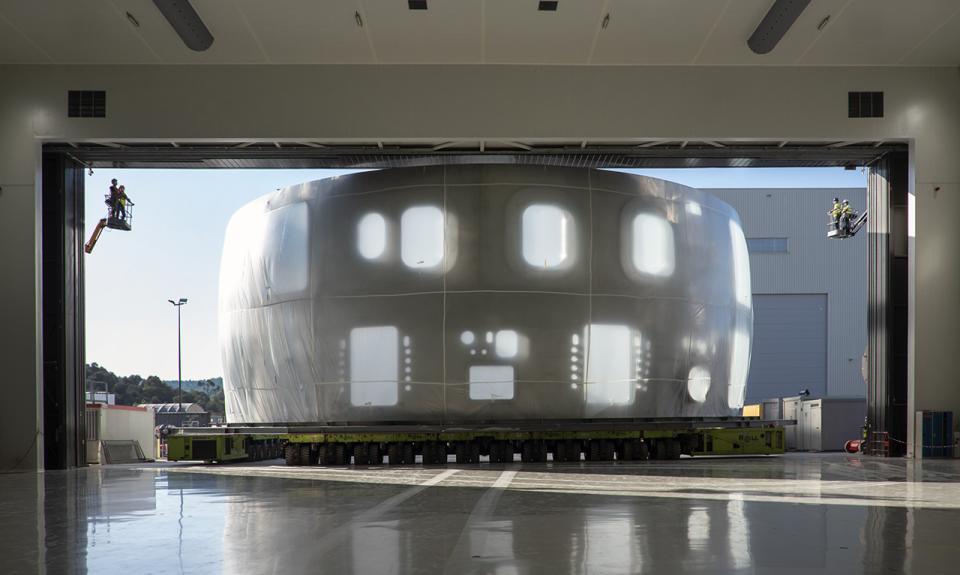 The lower cylinder of the cryostat is entering the Cleaning Facility.