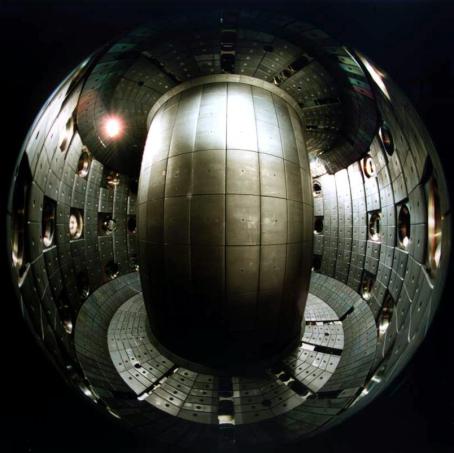 If you want to create hydrogen plasma, you need some kind of bottle where only a precise amount of hydrogen is present at the beginning. This provides a vacuum vessel, a hollow steel donut inside which the plasma is created and isolated from its walls by a magnetic field. The walls of the vessel are not able to withstand temperatures of 100 million degrees or more (no material is), but the magnetic field is holding the hot plasma back enough so that the vessel walls have to cope with “only” several hundred degrees. The vessel is typically made of stainless steel, with water cooling pipes incorporated into the walls of larger tokamaks. Eddy currents resulting in the metal material of the vessel help to stabilize plasma and reduce turbulence. On the inner side of the vacuum vessel, the so-called first wall panels are mounted. These are directly facing plasma, so they have to withstand the highest thermal load. Not only during normal operation but mainly during “off-normal” conditions when magnetic confinement goes wrong and lots of energetic particles are bombarding the vessel wall (e.g. in ELMs or disruption events). The thermal load in such situations can be compared to the heat load experienced by spacecraft re-entering the Earth’s atmosphere. The first wall is composed of replaceable tiles made of carbon, wolfram, or beryllium, and these tiles could be infused with water cooling pipes. The material from which they are made has to meet several conditions. First is the high melting point, so they will stay solid and unchanged. Second is their cohesion — the low potential of releasing their atoms into plasma — as atoms with a high atomic number could cause several heat losses due to radiation. Last but not least, is their potential for absorbing other atoms. Material with a porous structure could absorb particles from the atmosphere (carbon, nitrogen, oxygen) and release them into plasma when heated. These impurities could cool the plasma. The release of trapped atoms could be prevented by baking, when the chamber is heated before discharge and released gases are evacuated by vacuum pumps. The ability of trapping particles could cause serious problems in power plant, where rare tritium will be used as fuel. The porous material of the first wall could trap tritium that will be missing in the reaction. It is very important to construct the first wall tiles from materials that do not absorb tritium, so the device will have low tritium retention. 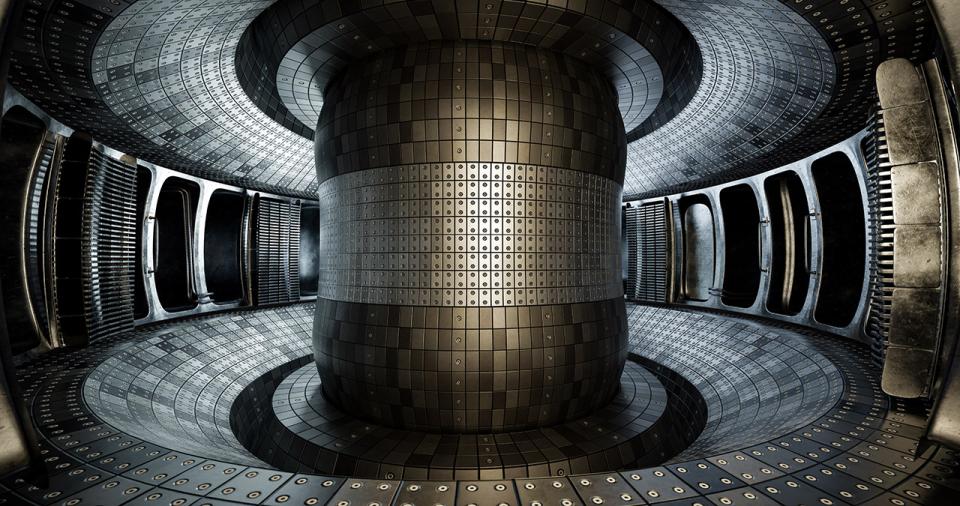 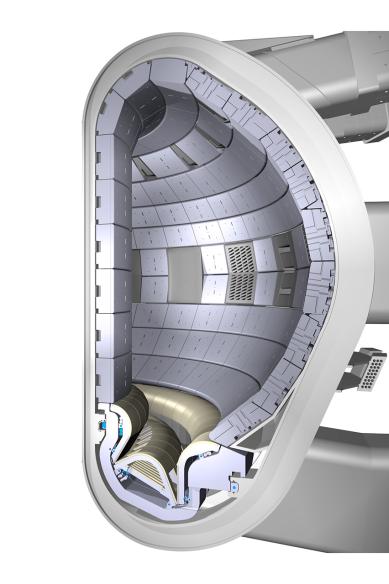 In a power plant, a vacuum vessel will have to cope with high neutron flux as neutrons originate from deuterium-tritium reaction and are not confined by magnetic field because they have no charge. Neutron impacts on the vessel wall will activate it and could cause radiation embrittlement, so the vessel wall material has to be made from nuclear-grade stainless steel that will sustain neutron loads many times higher than fission reactors have to. The activated chamber will be inaccessible to humans, and the tokamak will have to be equipped with remote maintenance devices that will do all the necessary work inside the vessel.

The vessel and the coils behind it will have to be protected by shielding. The neutrons will pass their energy to shielding material, and the produced heat will be removed by cooling and used for electricity generation in a steam turbine. Captured neutrons could also be used for tritium production. This element, rare on Earth, could be created by neutron capture in lithium, so the first wall panels will be equipped with some kind of tritium breeder. The best construction of breeders will be tested on the ITER tokamak. The combined protective first wall panels, tritium breeder and neutron shielding will be about 1—1.5 meters thick, so a big machine with strong magnetic coils will be necessary. 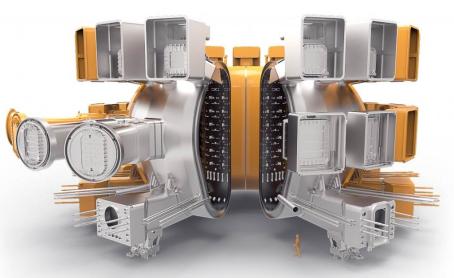 A high vacuum is maintained by vacuum pumps. Usually by a combination of mechanical pumps and powerful cryopumps capable of creating a low density of about one million times lower than the density of air. The cryopumps are based on cryopanels, cooled with supercritical helium and coated with activated charcoal as a sorbent material that could trap helium or tritium atoms.

The geometry of a vacuum vessel is usually depicted as an aspect ratio, which is a ratio between major radius and minor radius. If you imagine a donut filled with cream, then the distance from the donut hole to the cream is a major radius and the distance from the cream to the surface of the donut is a minor radius. If the aspect ratio is small, then the tokamak has the shape of a thick donut with nearly no donut hole. The bigger aspect ratio means that the tokamak resembles a thin donut with a large donut hole. Tokamaks with a small aspect ratio are usually called compact or spherical tokamaks.