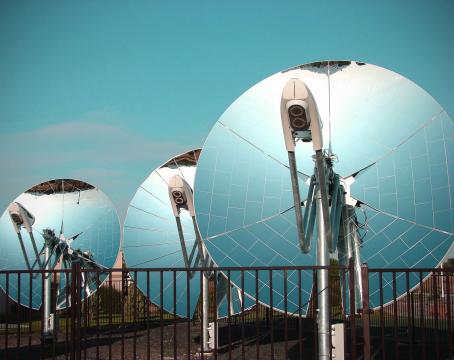 The high efficiency of parabolic dish collectors is somewhat cancelled out by the fact that they require two axis rotation in order to track the sun.

The parabolic dish collector (or concentrator) is a solar system that concentrates all the solar radiation falling on its surface into one focal point. Since the area of the dish is relatively large, significantly higher temperatures can be reached in the focus (as high as 700 °C) when compared to other solar systems. Parabolic dish collectors boast the highest solar-to-electric-energy transformation efficiency.

The manufacturing of mirrors, several meters in diameter, is very demanding. That is why larger, more powerful units are put together from smaller concave mirrors which together form a larger parabola. The disadvantage of this system is the necessity for two-axis movement. The supporting structure not only has to carry the weight of the dish but also the weight of the receiver because the absorber has to be turned with the dish.

The receiver, in most cases, is a Stirling external combustion engine. In the engine, a constant amount of gas is enclosed (helium or hydrogen) which is heated up in one place, expands and in another part of the engine, cools off. During expansion, the gas drives a piston thus doing work that is transformed into electrical energy. The absorber, located at the focal point, supplies the necessary heat to the motor.

The difficulty in construction of such massive parabolic dish collectors does not allow building units of large power output. One Dish has an output of tens of kW. More often they can be found in farms with dozens or hundreds of smaller units. With such numbers, considering there are moving parts involved, increased demands on maintenance arises.

The reflecting surface is usually made from a thin layer of glistening metal (silver or aluminium) which is under a protective transparent layer (glass or plastic). The reflectiveness of silver-glass combinations exceeds 90%. 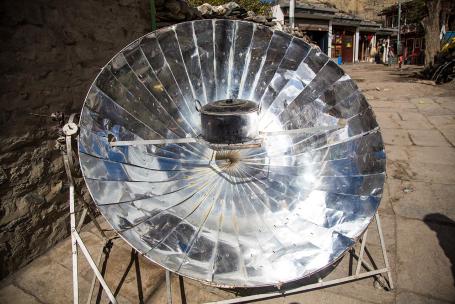 A solar cooker utilizing the principle of concentrating sun rays into a focus, in which a vessel with food can be placed.

The overall efficiency of the transformation of solar energy into electricity supplied to the grid of parabolic dish collector solar power plants is approximately 30%.

It is possible to reach temperatures exceeding 1,000 °C in the focus of parabolic dish collectors.

A parabolic dish collector 10 meters in diameter and an irradiation of 1,000 W/m² can power a 25 kW engine.