Ways to Use Solar Heat 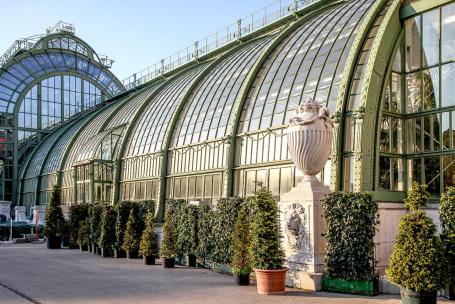 The steel structure of an antique greenhouse — still a functional work of art.

The energy of the Sun has been utilized since prehistoric times. Although the purposeful use of solar energy to generate electricity is a recent development, the thermal energy from sunlight had been utilized in various forms much earlier.

The first practical use of sun rays was to concentrate them to start fires. In China, fires were started this way as early as the 7th century BC. When building houses, people realized that if they built the houses facing south, the sun would heat the interior. Experimental foundations of passive solar systems were laid. Elements of solar architecture are present throughout the history of construction. Hand in hand with plate glass came greenhouses which allowed people to grow vegetables and ornamental plants from warmer regions. The first botanical greenhouse was built in 1550 in Padua (map). 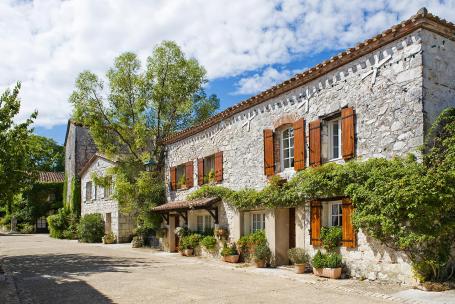 At any point in history, building south-oriented dwellings for heating was standard procedure in architecture.

The first attempts at using solar power for driving machinery date back to the second half of the nineteenth century. In 1861, the French teacher Augustin Mouchot constructed the first steam engine that was powered solely by solar energy. In 1866 he developed the first parabolic trough collector. In the seventies of the 19th century a Swedish pioneer in the field of utilization of parabolic collectors, named John Ericsson emerged in the USA.

Augustin Mouchot found a way to produce ice using only the thermal energy from the Sun.

The development of the first solar installations was incited by the notion that coal reserves, fuelling technical progress, were running out. 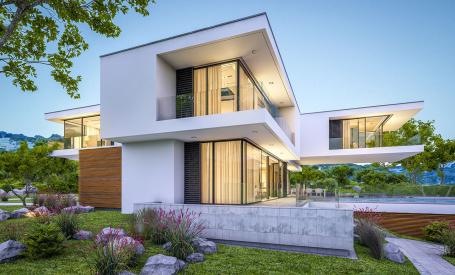 Most modern residential houses cannot do without glazed walls.

Passive solar systems take advantage of the principles of solar architecture. Aside from sunlight, they do not require any other energetic input or any kind of machinery for transfer and accumulating the thermal energy. Of course, in some cases, insignificant amounts of electricity are needed to control regulating vanes and various kinds of blinds or insulation or electronic control systems that increase the efficiency of passive solar systems and make them more user friendly.

In architecture, incorporation of passive solar systems is the simplest. A building can be designed to be heated by sunlight in winter while staying in the shadow in the heat of summer. The heat collected using appropriate passive designs and architectural elements significantly reduce energy demands for heating. 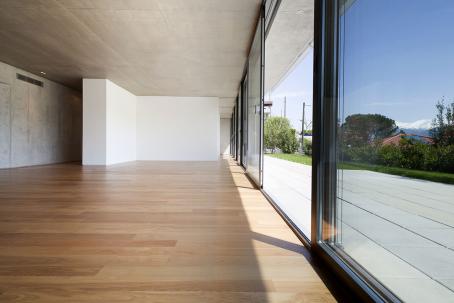 A glazed wall in a hallway of a residential house — a passive element in solar architecture.

Most commonly, this is achieved by employing the greenhouse effect. The basic element of passive solar systems is a glass surface oriented in the right direction which allows sunlight to pass inside the building, but hinders radiation from the inside to the outside. Glass surfaces are found in winter gardens, glass roofs and porches, south-oriented large windows, or in Trombe walls or transparent thermal insulation. The Greenhouse effect can be further exploited for the growing of vegetables and tropical plants.

The efficiency of passive systems depends on their orientation relative to the direction of the sunbeams, on the transparent insulation materials used and on the properties of architectonic features of buildings. Passive solar systems are very often incorporated in the designs of low-energy houses.

By using passive solar systems, up to 15% of heating energy can be saved.

Absorption materials should be as dark as possible. Bright white materials and objects reflect 80 to 98% of the falling solar energy.

A solar system integrated into the coating of a modern building.

Active solar systems capture and transform or even accumulate energy from sunlight. To increase the efficiency of heat collection and transfer, they use various electromechanical systems.

Active solar systems can be subdivided into two categories depending on the basic mode of operation. One type uses sunlight for heating up a heat transfer medium in thermal collectors, while the other transforms the solar energy directly into electricity. The advantage of photovoltaic systems is their versatility in terms of suitable locations for installation. These are usually individual units which can be adjusted or altered to be installed at any given location or on any building. The produced electric energy can be used immediately or it can be stored in accumulators or quite easily transported to another location. 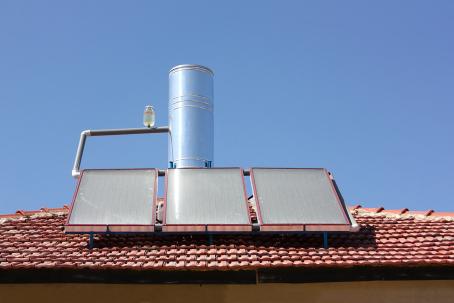 Thermal collectors are connected by pipes that contain a heat-transmitting medium to places of heat storage.

Thermal collectors are also individual, easily transportable units producing heat that can be used for heating buildings or to heat water. The area of the absorber is the same as the area of the collector. Large concentrated solar power installations have an absorber area much smaller than the area of the collectors; they are more efficient and have characteristics similar to large conventional power plants. They cover a larger area, require maintenance but they also produce amounts of energy comparable with conventional plants.

The efficiency of active solar systems depends on the duration and intensity of sunlight. Solar intensity is the amount of solar radiation falling on a given area in a given time. Duration, in this sense, is the average time the system is being irradiated in the frame of a predefined period (usually a year). These parameters vary significantly with different geographical locations and they are the determining factor for the economy of such solar plants. 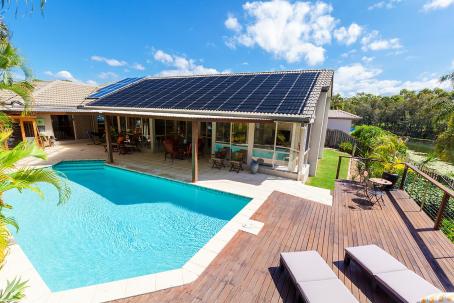 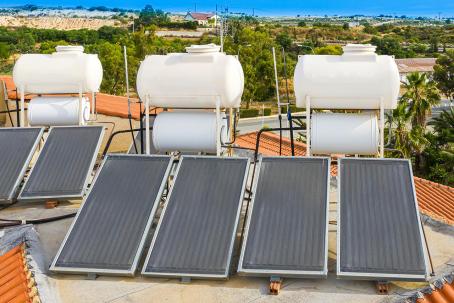 Three sets of flat thermal collectors with accumulation tanks make sure there is enough heat energy for everyone in the house.

In most solar systems, water is used as the heat transfer medium. In colder regions, where there is the risk of freezing and resulting damage to the system, binary cycles with an antifreeze mixture are used. In the absorber of a thermal collector, solar radiation is transformed into heat, which then heats the circulating heat transfer medium. The medium is subsequently pumped into a heat accumulator with a heat exchanger, where service or heating water is heated. After giving up its heat, the circulating medium flows back into the collector, and the whole process repeats itself, as long as there is a minimal thermal gain. If not, the system stops acquiring heat from the collector. Warm service water from the accumulator tank is distributed to points of consumption conventionally. An alternative is to use burst-proof plastic pipes which cannot be damaged by frost.

In winter months or in unfavourable meteorological conditions a solar system should be supplemented by an alternate heat source in order to secure uninterrupted heat supply to users. All elements of the system have to be insulated well to minimize heat loss.

More than 85% of households in Israel use thermal solar systems to heat service water.

A thermoelectric generator indirectly transforms solar radiation into electricity using many interconnected thermocouples. A thermocouple is a simple bimetallic device that generates electricity from temperature differences between the hot and cold junctions. It is the so-called Seebeck effect. The hot junction of the generator is heated due to the focus of concentric solar collectors. 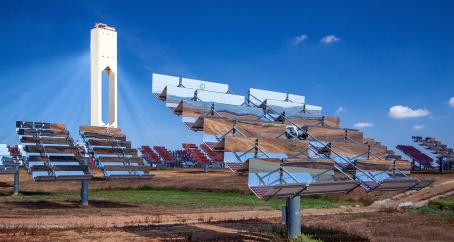 Solar energy is virtually inexhaustible and its use does not influence the energy balance in nature.

The main advantage of solar energy is its availability, inexhaustibility and minimal environmental impact. No harmful emissions are produced in the process of energetically utilizing solar radiation, neither are dangerous wastes. Photovoltaic systems and thermal collectors are practically maintenance-free.

The main advantage of solar power is its inexhaustibility. The amount of solar radiation falling onto the Earth is immense and even if massively utilized, it will have no impact on the biologic-energetic equilibrium in nature. The Sun will be shining for five billion more years maintaining its status as the primary energy source in our Solar System.

Solar energy is a renewable energy source and therefore environmentally friendly. Its utilization does not cause any pollutants to be released which would contribute to global warming, acid rains or air pollution. Solar energy can be silently produced in the exact same place as where it is consumed, there are no concerns with fuel supply and no waste is produced. 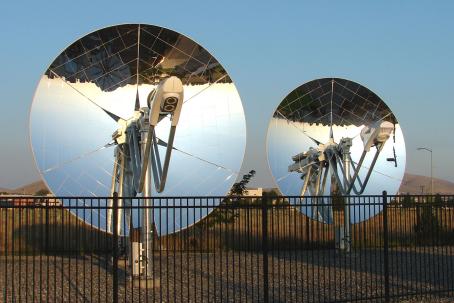 Using environmentally-friendly solar energy does not contribute to global warming.

Solar systems may be expensive to install but on the other hand, their operation is relatively cheap and with the right design, the return of the investment is guaranteed. Once installed, photovoltaic systems require no periodic investments and they are practically maintenance-free. Solar collectors also require very little maintenance but concentrated solar power systems with moving mirrors and turbines do require maintenance.

Silent operation, a minimum of moving parts, independence of fossil fuels and future expandability are compelling advantages of solar systems.