Home
Thermonuclear Fusion
Tokamaks
Most important tokamaks in the world

Most important tokamaks in the world

Since Lev Artsimovich’s lecture in 1968, where he presented a successful reaching of temperature of 10 million degrees in a T-3 tokamak, the tokamak principle has been perceived as a promising way to thermonuclear fusion. Rapid expansion of those experimental devices started all over the world and, to date, over fifty tokamaks have been built. A lot of them have been rebuilt and upgraded so they can keep pace with new scientific discoveries and bring new knowledge about plasma and fusion. Others are under construction or planned. 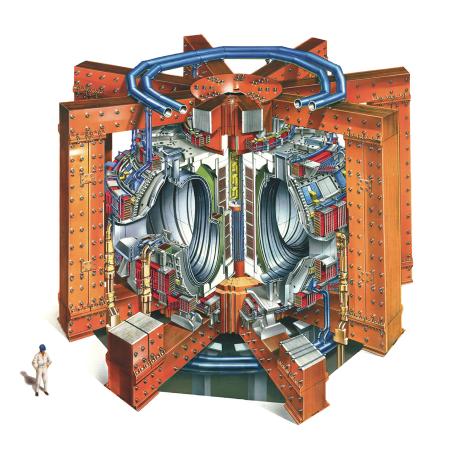 operated by Culham Centre for Fusion Energy, UK, is an old and big tokamak-although it is neither the longest operating one nor the biggest one in terms of plasma volume. Its first plasma was initiated in 1983, and since then, JET has brought many important discoveries to the fusion research field. The JET tokamak is a large machine with a plasma volume of about 80 m3, a major radius of 2,95 metres and a minor radius of about 1,25 metres. The magnetic cage is created by 32 copper-wound magnets, each one weighing 12 tonnes. It was one of the first tokamaks to be designed to use a D-shaped vacuum chamber. Because of it, it was easy to slightly change the magnetic configuration and add a divertor in 1991, which improved the quality of its plasma pulses. This was also the date from which experiments with the deuterium-tritium mixture started. At the time, JET was the only tokamak in the world that could work with the D-T fusion reaction. In 1997, it nearly reached scientific breakeven by generating 16.1 MW of fusion power. The Q (ratio between input and output power) was 0.67, so more energy was added than gained, but it was a success that has not been overcome by any other tokamak. Working with tritium gives a lot of valuable information but leads to a problem of how to access a vacuum vessel activated by neutron flux. A remote handling system was constructed with which, for the first time, it was possible to exchange certain components using artificial hands only. A lot of information gained by JET was used during the design and construction of ITER. In 2009, the beryllium/tungsten plasma facing wall, similar to that which will be used in ITER, was installed to be tested. Since the power requirements during the plasma pulse (up to 1,000 MW) are greater than the limited grid intake, two large flywheel generators were built to ensure power supply during experiments.

of Princeton Plasma Physics Laboratory, USA, was the second one designed to experiment with a deuterium-tritium mixture. It was built to achieve scientific breakeven, but for many reasons it fails to do so. Nevertheless, it breaks many records in confinement and plasma temperature. A world record of 510 million degrees was reached in 1995. A triple fusion product (product of density, temperature, and confinement time) close to the goal for a practical reactor was also created at TFTR, unfortunately with a temperature far below what would be required for successful breakeven. In 1995, TFTR scientists explored a new fundamental mode of plasma confinement — enhanced reversed shear, to reduce plasma turbulence. The TFTR has a chamber with a circular cross-section, a major radius of about 2.6 meters and a minor radius of about 0.9 meters, with twelve copper toroidal coils. It was in operation from 1982 to 1997. Subsequent decommissioning gives a rare opportunity to closely inspect coil and vessel material irradiated by fusion neutrons.

operated in Naka, Japan, could be called, with the plasma volume up to 130 m3, the largest tokamak in the world, although its first plasma was not ignited yet. It rose from upgrading its predecessor JT-60U, and this tokamak was upgraded from JT-60, which started operation in 1985. Both are record holders. To date, JT-60 has the world record for the hottest ion temperature ever achieved (522 million kelvin) and JT-60U holds the record for the highest value of the fusion triple product achieved. For JT-60SA, pulse lengths exceeding 100 seconds are expected. The device could work with deuterium or hydrogen gas (it is not designed for tritium use) and heat it with its powerful heating systems up to 200 million degrees. It has a system of 18 D-shaped NbTi superconducting coils cooled by liquid helium to 4 Kelvin. Each of the 18 coils is 7.5 meters high and 4.5 meters wide, and together they weigh 370 tonnes. The dimensions of JT-60SA are about half the size of ITER and it will be the most powerful tokamak in the world before ITER starts operation. 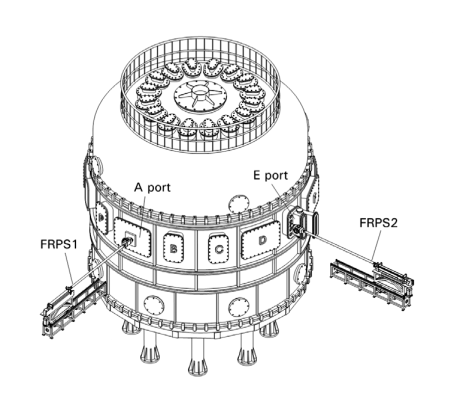 is a Chinese tokamak located in Hefei. It was upgraded from HT-7, which started operation in 1990. EAST had its first plasma in 2006 and since then has been working hard to beat several fusion records in temperature and plasma duration. For example, in 2011, it became the first tokamak to successfully sustain H-mode plasma for over 30 seconds at 50 million kelvin and in 2021, EAST reached a milestone of 120 million kelvin electron temperature for 101 seconds. EAST has both poloidal and toroidal coils made from superconducting material. It has a major radius of 1.7 meters and a minor radius of 0.4 meters. The plan of its operators is to maintain 100 million kelvin of hot plasma for 1,000 seconds (about 17 minutes).

WEST is an acronym for “W Environment in Steady-state Tokamak” 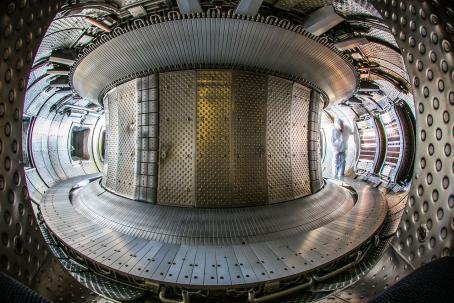 where W is the chemical symbol for tungsten. Tokamak WEST, located near Cadarache, France, is the successor of the ToreSupra tokamak that started operation in 1988 and holds the record for the longest plasma duration time for a tokamak (6 minutes 30 seconds). After modernisation, WEST reached first plasma in 2016 and serves as a test bed for ITER and DEMO. With the help of new magnetic coils, its magnetic configuration was changed from circular to an ITER-like “D” shape, and a tungsten divertor was added. Unlike ITER, it has a tungsten first wall, not beryllium, more in anticipation of the planned first demonstration fusion power plant, DEMO. WEST is equipped with superconducting magnets and some of its plasma facing components are actively cooled. Pulses as long as 1,000 seconds are expected from this tokamak.