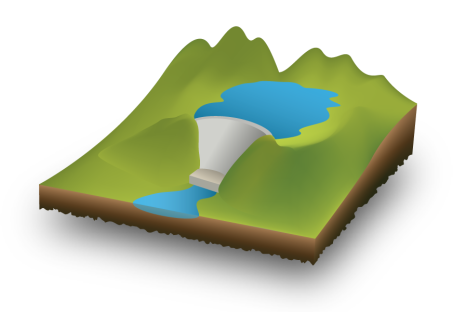 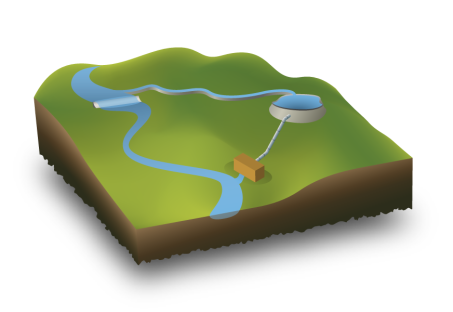 The principle of a derivational hydroelectric power plant lies in diverting a part of a river into a derivation canal that is significantly less steep than the original river bed. The diversion is achieved using barrages or dams with sluices. The power plant that makes use of the head between the diverted water and the river is usually several kilometers away from the barrage or dam. If the canals are open and lead along terrain contour lines, we speak of an unpressurized derivation. In the case of a pressurized derivation, the water feeding the turbines is led in a penstock or an underground tunnel. After leaving the turbine, the water returns to its original riverbed. Seasonal changes and varying environmental conditions strongly influence the power output of these types of plants. 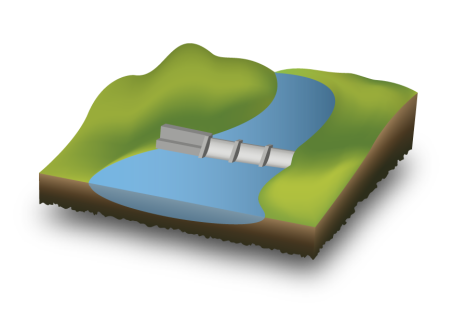 These kinds of power plants are best-suited to lowland rivers in flat-lying country where only low barrages or dams can be built. There is little head but flow rates are substantial and there is no reservoir. They serve as base load power plants and their power output wholly depends on the actual flow rate of the river. If maximum operation flow is exceeded the remainder of the water flows over the barrage without any energy being harnessed. 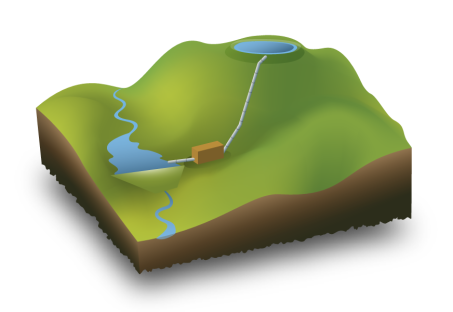 The only known technology for storing produced electricity in the potential energy of water. A characteristic feature of these power plants is the two distinct, upper and lower reservoirs interconnected by penstocks. The aggregate of the plant consists of a water pump, a water turbine and an electric motor-generator all on one shaft. In times of electricity overproduction, this plant consumes electricity and pumps water from the lower reservoir up to the upper one. When the load peaks, when there is not enough energy in the grid, the accumulated water is released to drive the turbines and power generators and returns the accumulated energy back to the grid. To produce 1 kW of electricity, a pumped storage plant consumes roughly 1.3 kW during the off-peak time.

A great advantage of pumped-storage power plants is their capacity to quickly change their mode of operation from pumping to power generation within just a few minutes and in this way to dynamically respond to the actual load situation in the grid. 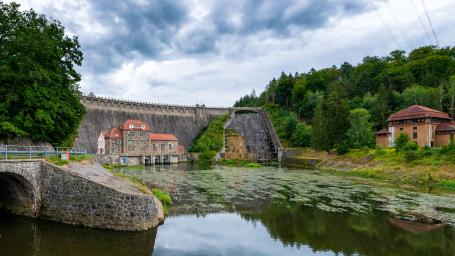 A historical dam with a small hydroelectric power plant. At the right we can see a spillway.

Small hydroelectric power plants are built on smaller water streams, often on sites of former mills and barrages, where environmental conditions and precipitation allow it. The output limit under which a power plant may be considered as small depends on local legislation and usually is only a few MW. These small power plants are often driven by a cross-flow turbine (or Banki-Michell turbine); a cheap and simple design with the water passing through the blades of the cylindrical runner twice (outside to inside, then inside to outside). Where higher yields are expected, Kaplan or Francis turbines may be installed.

Throughout the year, the flow rates in small power plants vary significantly. Therefore, the power output fluctuates as well, but these fluctuations are slow and foreseeable limiting output surges to the grid.

If proper building and design solutions are applied, small hydroelectric power plants can be considered one of the most ecological and economical sources of electric energy. If all rules are followed, construction and operation should have minimal impact on the original ecosystem of the water course.