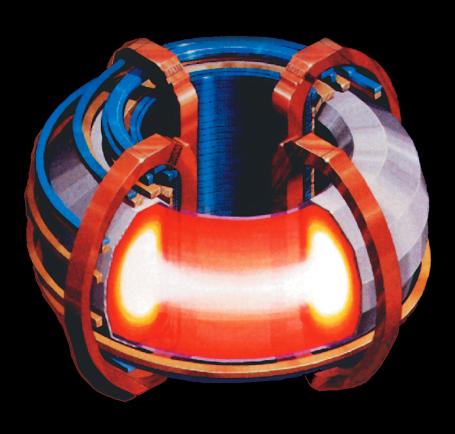 The word “tokamak” is of Russian origin and is an acronym for “TOroidalnaja KAmera i MAgnitnyje Katushki” — toroidal chamber and magnetic coils. It uses a magnetic cage in the shape of a torus (very much the same as the shape of a donut) created by magnetic coils. In this cage, it is possible to isolate hot plasma from the vessel wall, heat it to fusion temperatures up to 150 million kelvin, and ideally ignite thermonuclear fusion. The magnetic cage can be used because hot matter (i.e., heated to a few million degrees) is composed of charged particles, negatively charged electrons and positively charged ions, that obey magnetic fields. Charged particles in a magnetic field spiral along magnetic field lines. Ions spiral in slightly larger circles (known as the Larmor radius) and in the opposite direction to electrons. In parallel magnetic field lines, created by, for example, in the core of a solenoid, particles travel in one dimension only, creating a column of hot plasma isolated from the walls of the device. As an infinite long solenoid is impractical, the idea is to bend the solenoid into a torus. The donut-shaped chamber encircled by toroidal coils is the basic design of a tokamak. For pure geometrical reasons, the coils on the inner side of the torus (in the donut hole) are closer to each other, so the magnetic field is stronger there than at the outer edge of the torus. Particles in a gradient magnetic field start to move across the field lines. Electrons drift down and ions up, so gradually the charges separate and the resulting electric field overcomes the magnetic one and pushes the plasma out of the torus. To overcome this, particles must be forced to spiral around the torus. In a tokamak, this is done by electric current flowing through plasma. The current generates a magnetic field which combines with the toroidal magnetic field and the resulting field is desirably helically twisted. Each particle is then trapped on a closed magnetic surface in the shape of a donut, running once on the inner side of the torus and once on the outer side of the torus, so unwanted drift is cancelled out and particles stay on their magnetic surfaces and inside the vacuum vessel. The plasma current is induced in the same way as current is induced on the secondary winding of a transformer. In the tokamak, the secondary winding is the plasma itself. Since the transformer is a pulse device, the tokamak does not operate continuously but in pulse mode like the transformer. Various means are explored to enable the tokamak to operate in steady-state instead of pulse mode because the power plant has to operate in continuous mode. To properly place and position the plasma, the third type of coil is needed — poloidal coils — that create a vertical magnetic field that slightly pushes plasma toward the tokamak centre. 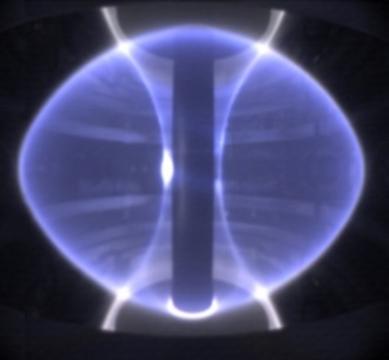 When creating plasma in a tokamak, first the toroidal and poloidal magnetic fields are switched on. Then the gas, mainly hydrogen, is puffed in. The gas is mostly neutral, so few ions are added for a good start. The plasma pulse begins with the start of the transformer pulse. Electric current is generated in gas and electrons (and ions) start to move around the torus. Charged particles are colliding with neutral ones, ionizing them. When ionized, those particles move along the magnetic lines, accelerating and colliding with even more particles. In the first phase, the non-ionized gas has high resistivity to induced current and the plasma heats rapidly. This is called Joule (ohmic) heating and serves as primary heating in the early stages of plasma creation. When heated up to about ten million degrees, most of the gas is ionized. Plasma resistivity decreases. This is the time for other types of heating. NBI (Neutral Beam Injection) uses a particle accelerator to generate neutral particles that are fired into plasma to pass their energy to plasma particles. Microwaves with frequencies easily absorbed by electrons or ions are also used (electron cyclotron resonance heating and ion cyclotron resonance heating). With those heating efforts combined, temperatures of up to 100 million degrees can be reached inside the tokamak. However, the pulse is only as long as the pulse in the transformer (in order to induce current in the secondary winding of the transformer, which is plasma in this case, you must change current in the primary winding, which cannot be increased indefinitely). Another way of maintaining current in plasma should be started at this moment to be able to operate the tokamak in stable mode. One possibility is current drive, when the electric current is forced by radio waves of a special frequency. Another one is bootstrap current, a self-generated and self-sustained current that is created in plasma after certain conditions are induced.