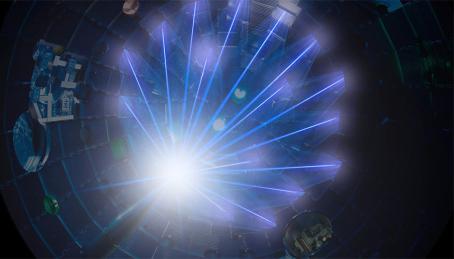 Lasers aiming at the target inside the chamber.

The devices compressing the target in inertial fusion are generally called drivers. In the early research, various types of drivers were considered, like heavy ion beams or X-rays from fission explosions. Since the laser’s invention in 1960, the laser has been adopted as the most promising driver.

The acronym “laser” stands for “light amplification by stimulated emission of radiation”. It produces pulses of coherent light of one wavelength. During laser pulse formation, the flashes of “pumping” light excite electrons in the laser gain medium, e.g. neodymium-doped glass. When electrons are de-excited to their ground state, they emit photons of the same wavelength. A pulse of light is travelling back and forth through the laser medium, reflecting from mirrors on the ends, de-exciting electrons pumped by flashlamps and amplifying on each pass. After amplification, the beam can be sent via optical path wherever needed, focused on a target or modified in many ways. 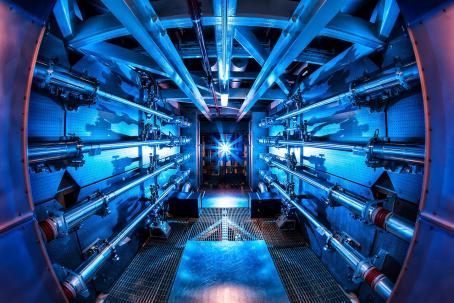 The present lasers used for inertial fusion are huge devices, occupying an area of about three football fields with power in the order of up to petawatts. Basically, they are a series of amplifiers in a row. At first, a weak laser pulse is created. Then it is amplified, split into more beams, amplified, and split again into many more beams, amplified again, and finally aimed at the target. The energy of a laser beam arises in a few millionths of a second from 1 billionth of a joule to several million joules. Usually, several dozens of beams are created during the amplification process, each with exactly the same energy, so they can symmetrically compress the target from many sides at once. The proper timing of a laser beam’s arrival is ensured by its path length; as all the beams are travelling at exactly the same speed of light, the longer the optical path, the later the beam will arrive. With a precious set of mirrors and optical assemblies, the beams can be synchronized before entering the target chamber. The inertial fusion lasers are usually neodymium glass lasers that generate infrared light, but the fusion pellet is best compressed by ultraviolet light. This is because infrared light generates energetic electrons that penetrate the pellet surface (called an “ablator”) and preheat the fuel, making it harder to compress. At ultraviolet wavelengths, energetic electron production occurs less. The laser wavelength is therefore converted to ultraviolet via final optics assemblies. Their task is also the final focus of the beam on the target.

The laser pulse duration varies between femtoseconds and nanoseconds depending on the experiment design. At the most powerful laser in the world, the National Ignition Facility, the laser has to travel about 1,500 metres from its origin to its destination on the target surface. Its journey takes only about 5 microseconds.